In a newsfeed I receive from Ayatollah Khameini, the Supreme Leader of the Islamic Republic of Iran, I saw this interesting post. It would appear that the Ayatollah likes socialism. He presumed, amazingly, to offer some advice to Americans about their capitalist government: 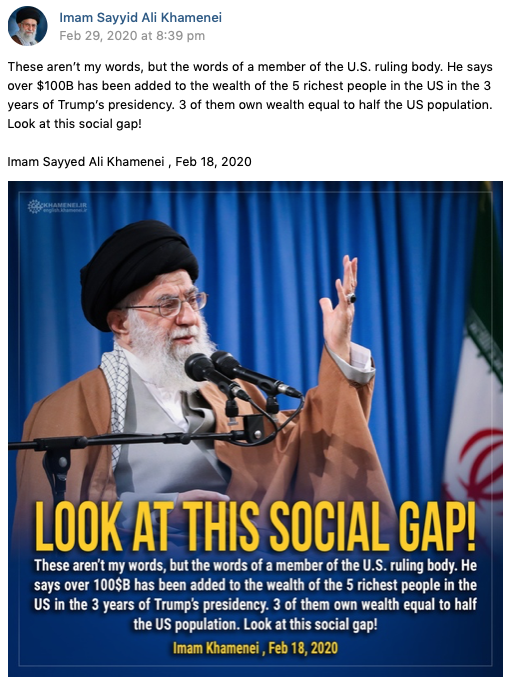 this piece by Julie Roys, entitled 5 Reasons why Socialism is not Christian. This is a great piece for thorough reading, but for Orthodox Christians, some of Mrs. Roys’ points may appear to fall flat. However, the soul of her analysis is spot on, and we wish to build on her work to provide some perspective that may be helpful to Orthodox Christians and perhaps some of the more liberal-minded Roman Catholics, such as are often found in the United States.

Roys makes these her five basic reasons Christianity is incompatible with Socialism:

1.Socialism is Based on a Materialistic Worldview

In her piece, she briefly, but quite effectively covers these factors. Her analysis is fairly accurate and definitely honest, limited only by the scope of what she understands as Christian theology and praxis.

We will give Julie Roys comments in italics, and then further comment in normal type:

1. Socialism is Based on a Materialistic Worldview

According to socialists like Bernie Sanders, the greatest problem in the world is the unequal distribution of wealth.

This betrays a fundamentally materialistic worldview, which is the basis of socialism.

To socialists, all that really exists is the material world. In fact, Karl Marx, the father of socialism/communism, invented the notion of dialectical materialism — the belief that matter contains a creative power within itself.This enabled Marx to eliminate the need for a creator, essentially erasing the existence of anything non-material.

There exist two worlds: the fallen physical world that we easily see, perceive and manipulate to either good or evil ends, but also there is the ‘noetic’ realm, where the angels and the saints dwell,  sometimes called the “spiritual world.”

As the highest of God’s creations, we human beings are able to participate in both worlds simultaneously. Since this world is fallen, it is easy to perpetuate evil and suffering, but if one wishes to find union with God, through the salvation and grace of Jesus Christ, he or she can strive to participate in the heavenly world in this life as well as the next.

As a person progresses in their efforts to draw closer to God, the material wealth they have often becomes a distraction. If they so choose, many of them give it all away so they are not burdened by it. However, this is not exclusively the case. Some use their wealth to support their local or extended community of believers, or to effectively do charitable work in some manner. Whatever the manifestation of this, the person sees their wealth as God’s gift to share and help others in some way. How exactly that is expressed is bound only by the conviction that the action is pleasing to God.

“Stuff”, therefore, has almost an infinitesimal role in terms of the acquisition of contentment or happiness. Whether one has a lot of it or very little, there is no interference with the possibility of this communion and union with God, which are the true sources of all joy in this life and in the next.

Many socialist minded people in the Orthodox Church seem to carry the idea that “money is the root of all evil.” But they have the anecdote incorrect. It is really “The love of money is the root of all evil.” In other words, when someone loves wealth, likes to count it and they hoard it and treasure it above anything or anyone else, then yes. That person is in bad shape.

Money itself, even vast amounts of it, is not evil at all. It is a great tool. Lydia, the woman in Acts who sold purple, was very wealthy. She used her wealth to turn her home into a church, where the believers could meet and pray, often for many hours at a time.

One story some socialist-minded Christians try to use is the story in Acts about how the early Christians owned nothing, sharing all things in common. The story goes on to say that two people, Ananias and his wife Sapphira, decided to take advantage of this group by keeping back proceeds from a piece of property they sold. The rest of the group was truly living in common, by personal choice, but these two kept “a little backup”, we might call it today.

Peter got wind of this and called Ananias to ask him about it, asking him questions about the property. Ananias lied, knowing that only his wife knew the truth along with him. But Peter knew it was a lie, and his response was not about money being held back from the community, but about Ananias conspiring to deceive the community. Ananias, on hearing he was found out, dropped dead on the spot.

Sapphira appeared later, not knowing her husband was dead and buried, and Peter asked her about the transaction in question. She repeated what her husband had said, because they had their cover story worked out perfectly, but again, Peter knew she was lying, and called her out on this same matter. His response to both of them is so specific and important to this discussion that we must reprint it here:

…Peter said, Ananias, why hath Satan filled thine heart to lie to the Holy Ghost, and to keep back part of the price of the land? Whiles it remained, was it not thine own? and after it was sold, was it not in thine own power? why hast thou conceived this thing in thine heart? thou hast not lied unto men, but unto God.

Peter answered unto her, Tell me whether ye sold the land for so much? And she said, Yea, for so much. Then Peter said unto her, How is it that ye have agreed together to tempt the Spirit of the Lord? behold, the feet of them which have buried thy husband are at the door, and shall carry thee out. (Both excerpted from Acts, Chapter 5, King James Version)

The sin was not holding back money. It was the love of money, and conspiring to lie to God (and the community) about it.

Socialists are often very quick to miss this point. They are further quick to miss the point that the reason the early Christians tried this communal living was by purely personal choice. It was never made as a requirement to be Christian, but sometimes Jesus presented the idea of doing this – selling all one had, giving the money to the poor and following Him without further distractions, as the greatest possible expression of love for Him, and not at all as a requirement of being a believer.

There is nowhere in Christ’s teachings mandating any particular action to be done with money, other than the basic fact that if one loves money more than anything else, at the end, they will lose their wealth and they will have nothing else. The next world doesn’t require cash on hand. It requires souls ready to be in Eternity.

This flatly stated fact emphasizes the point made earlier, that we as human beings live in two worlds simultaneously – the material and the noetic / spiritual. Money resides in the material world, but only that which the spirit undertakes will last when we cross over, body and soul, to the noetic realm where we remain for eternity, either in blessedness and eternal life, or in torment and eternal death.

For the Christian believer, this is the ultimate point of what we do. Socialism simply cannot be relevant to people who understand that this world is simply not all there is.

Many who read this will be inclined to think I am writing about religion. In fact, this is not true. The Christian worldview includes all of this. If we try to act like the spiritual aspect of Christianity should be somehow ignored, explained away with logic or anything else, we are denying the truth of what Christ teaches us.

If anyone else is cringing at reading this, this can serve as a point to consider: What has happened in our lifetimes that makes us so inclined to reject the spiritual side of Christian teaching? I would suggest that the amazing level of secularization in our modern age has conditioned us to believe that we must not talk about such realities with others. Yet, this reality is the lynchpin of the faith itself.

This shows how successful secular humanism and its progeny, socialism, really are in our lives.

Part II of this series will explore Julie’s themes further.

Rumble to go public, get a big cash injection, and take on YT in 2022

Let’s talk about the week in news (Live)

Elon Musk Says A SpaceX Bankruptcy Is “Not Impossible”

Russia Scrambles Jets After US Spy Plane Dangerously Close To Passenger Flight From...

Elon Musk Says A SpaceX Bankruptcy Is “Not Impossible”