Overstock shares fell Wednesday after company CEO Patrick Byrne said in a statement two days before that he played a part in the “Russian investigation” and “Clinton investigation.”

The company lost a third of its value in the two days since Byrne released a statement titled “Overstock.com CEO Comments on Deep State,” in which he referred to federal investigators as “the Men in Black.” Overstock’s shares fell over 22%, bringing the company’s slide to 36% since Monday.

“I will speak no more on the subject,” Byrne wrote in the statement, which referenced Russia’s interference in the 2016 election. “Instead, having lived in places lacking Rule of Law and having witnessed the consequences of its absence, I plan on sitting back and watching the United States Department of Justice re-establish Rule of Law in our country.”

He added: “It was the third time in my life I helped the Men In Black: the first was when my friend Brian Williams was murdered, and the second was when I helped the M.I.B shake up Wall Street a decade ago.” Byrne also claimed to be the “‘notorious missing Chapter 1’ of the Russian investigation.” (RELATED: Overstock Opens Up Capital Market With Entrex’s TIGRcubs) 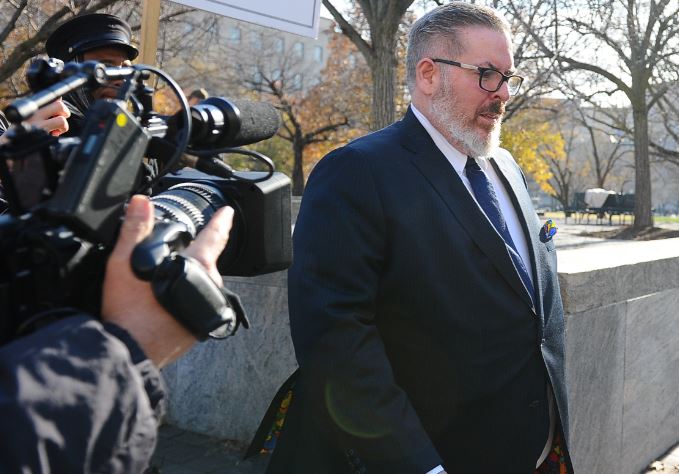 Robert Driscoll, an attorney for Maria Butina, who is accused of acting as a Russian agent to infiltrate the National Rifle Association lobby group and influence U.S. policy toward Moscow, leaves U.S. District Court after his client’s plea hearing in Washington, U.S., December 13, 2018. REUTERS/Mary F. Calvert

This is not the first time Byrne has made unusual comments. He suggested Overstock’s cryptocurrency ambitions are similar to Jonas Salk’s polio vaccine and joked in a recent conference call about loaning office space to the federal investigators amid an investigation into the company’s tZero push.

Overstock has not responded to the Daily Caller News Foundation’s request for comment.

Robert Driscoll, the lawyer for Maria Butina, an alleged Russian spy, reportedly sent a letter to the Department of Justice requesting a probe into potential misconduct by the FBI in handling information from Byrne. Driscoll said in the letter that Byrne acknowledged he provided the investigators with information about Butina.

Byrne first contacted the FBI about Butina after meeting her at a conference in July 2015. He said the FBI encouraged him to strike up a romantic relationship with Butina to gather information about her efforts to infiltrate conservative political groups in the U.S.

Butina, who was sentenced to prison April 26, will likely be deported back to Russia after her release. She pleaded guilty pleaded in December 2018 of conspiring with a Russian government official against the U.S. by attempting to infiltrate conservative political groups, including the National Rifle Association.