The Pennsylvania Supreme Court has extended the mail-in ballot deadline to three days after Election Day.

The court order is being touted as a major victory for the left in the critical presidential swing state.

“State law says mail ballots must be received by 8 p.m. on Election Day, but the high court said Thursday that ballots will be counted if they are received by 5 p.m. the Friday after the Nov. 3 election,” reports Philadelphia Inquirer. “To count, ballots arriving after Election Day must either be postmarked by Nov. 3 or have no proof they were sent afterward.”

“Ballots that arrive by the new deadline with missing or illegible postmarks would still be counted.”

On the same day, the court issued a separate decision denying third parties the ability to deliver absentee ballots for voters, a practice commonly known as “ballot harvesting.”

“State Supreme Court in Pennsylvania just affirmed that Ballot harvesting remains illegal,” tweeted President Trump. “We will be watching that the Democrats do not Ballot Harvest – a felony.”

“In other words, the Republican Party won on the atrocious Ballot Harvesting Scam…” 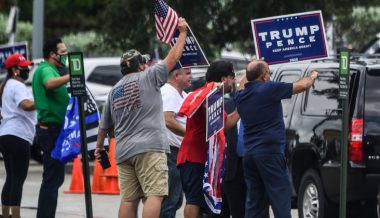