A female commercial helicopter pilot has become the first woman to fly the F-35 fighter jet for the U.S. Marine Corps.

The Marine Corps announced last week that Marine Capt. Anneliese Satz, 29, a native of Boise, Idaho, had completed her training program in June. Satz trained for four years at bases in Florida, Texas, and Mississippi.

Pilot positions in the Marine Corps were made available to women for the first time in 1993, according to reports.

“The first flight in an F-35 is by yourself,” Satz commented. “The syllabus thoroughly prepares you for that first time you take off and for every flight after that, it’s an exhilarating experience.”

The pilot said hard work and the training she received were key to her achievements. 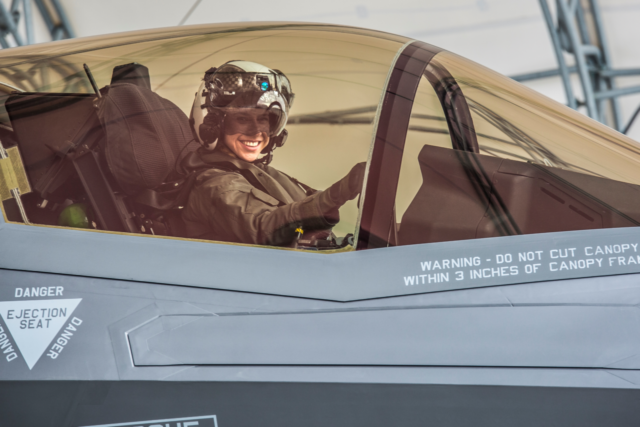 “At each of my training schools I did my best. I truly believe that showing up prepared and working diligently are two major keys to success,” she said.

During her four years of training, Satz earned over 300 flight hours, spent a significant amount of time practicing in simulators while also studying for written and practical application exams; and although training and learning never stops, she will now be assigned to her first operational unit, Marine Fighter Attack Squadron 121, the Green Knights in Iwakuni, Japan.

The Marine Corps Times called it a “historic feat” for the Corps because Satz is joining a fairly small field of Marine F-35 pilots.

“The Corps’ high-tech stealth fighter pilots were only manned with 86 pilots as of February, according to data obtained through a government records request. The field is authorized to have 263 pilots,” the report said.

Satz thanked her instructors for their expertise and knowledge and said she is eager to begin her service on the force.

“This is a phenomenal program made possible by all of their hard work. I am thankful to have had the opportunity to learn from all of them,” she commented. “I am incredibly excited to get to VMFA-121 and look forward to the opportunity to serve in the Fleet Marine Forces.”

Illinois Lt. Gov. Juliana Stratton on Highland Park Shooting: ‘Too Many Guns on Our Streets’