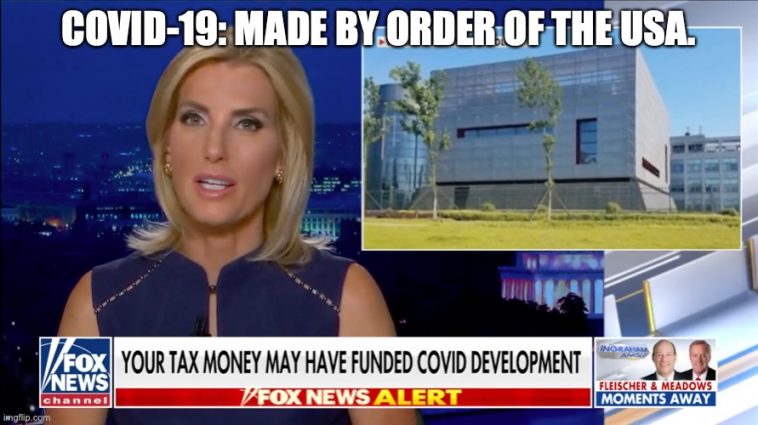 Every American citizen, and every citizen on Planet Earth ought to be roaring with rage at the United States government. More and more evidence conclusively shows that elements within the American government funded the development of SARS-CoV-2 in a Chinese lab, all the while blaming the Chinese government for the whole thing, when if it had not been for Dr Fauci and others like him supporting gain-of-function research in China, our world might yet be operating more or less normally.

This is worse than just egg on the face of the American government. This is a blot that has literally traveled around the world and affected every single citizen of the planet. Doctor Anthony Fauci, the Deep State, and probably a great number of people on all points of the political spectrum participated in this travesty.

The good news about all of this is that it is getting exposed. This report above, given by Fox News’ Laura Ingraham, is a very good “summary of the week” in its recounting of the development of information concerning this issue. It is not new information, at least not most of it. Next News Network reported on it over a year ago. I covered their report here on The Duran and have continued to offer food for thought on this topic since that time.

Many other “alternative” news outlets also offered information about the lab leak possibility and the US-China connection. But the pivot of the mainstream media from denial of this connection to cries of “resign, Dr. Fauci!” is very recent, taking only about four weeks or so to move an entire national narrative.

There are a few takeaways we must consider: