Russian police arrested over 600 demonstrators in central Moscow who are protesting the exclusion of opposition candidates from the ballot for Moscow city council.

Chilling footage of today’s crackdown on pro-democracy protesters in Moscow.
CC’ing all Putin whitewashers and cheerleaders.pic.twitter.com/UTZUlzkTqt

Central Election Commission disqualified some candidates wishing to run for the city council.

People are protesting outside the Moscow mayor’s office. Than this is happening… (see video)pic.twitter.com/O9Ovt8IVTz

#Russia #Moscow #protests: Riot police out in full force–with dogs–beating protesters on the ground. This couple asked for an ambulance for his broken ribs & a concussion. Cops refused, hauled him off to paddywagon, claiming “nobody beat you.” @mediazzzona pic.twitter.com/S2zYWd713G

Russian police arrested more than 500 people on Saturday, including prominent activists, around a political protest in Moscow to demand that members of the opposition be allowed to run in a local election later this year. More here: https://t.co/nhMybGyAJF pic.twitter.com/02QLkolFke

In total, 638 people were arrested – while several opposition figures who wanted to run for the council were rounded up before the protest according to AP. “Alexei Navalny, Russia’s most prominent opposition figure, was sentenced Wednesday to 30 days in jail for calling for the unauthorized gathering Saturday in the heart of the Russian capital,” according to the report.

Another opposition leader, Sobol, was carried out of her residence on a sofa.

Some protesters chanted “Putin is a dickhead!” as they marched through the streets.

In central #Moscow, #Russia, protesters are chanting “Putin is a dickhead”. Over 630 protesters detained during a peaceful pro-democracy #protest rally in central Moscow: pic.twitter.com/QEqeat5x9y

The Moscow city council, which has 45 seats, is responsible for the city’s budget. It is currently controlled by the pro-Kremlin United Russia party. Seats carry a five year term, which are up for re-election on September 8.

Democrats are demanding the investigation into a non-existent crime keep going until they find any crime they can use to de-legitimize a duly elected President. 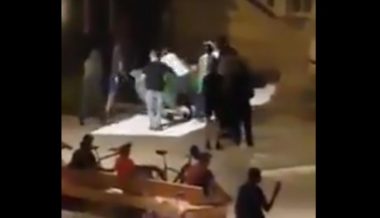