A video showed Boebert telling her supporters in Colorado about an alleged recent elevator ride with Omar. Boebert said she witnessed a Capitol police officer run toward them “with fret all over his face” to try and stop the elevator door from closing, while the two were inside.

“I look to my left and there she is: Ilhan Omar. And I said, ‘Well, she doesn’t have a backpack. We should be fine,’” Boebert said in the video, as her supporters cheered. “I looked over and I said, ‘Oh look, the jihad squad decided to show up for work today.’”

“Don’t worry, it’s just her staffers on Twitter that talk for her. She’s not tough in person,” Boebert added in the video.

Boebert has since apologized for the comments and said she has reached out to Omar to speak with her directly.

“I apologize to anyone in the Muslim community I offended with my comment about Rep. Omar,” Boebert said in a statement to Fox News. “I have reached out to her office to speak with her directly. There are plenty of policy differences to focus on without this unnecessary distraction.”

Omar said that Boebert made the entire story up.

Fact, this buffoon looks down when she sees me at the Capitol, this whole story is made up. Sad she thinks bigotry gets her clout.

Anti-Muslim bigotry isn’t funny & shouldn’t be normalized. Congress can’t be a place where hateful and dangerous Muslims tropes get no condemnation. https://t.co/S1APT7RbqW

“Fact, this buffoon looks down when she sees me at the Capitol, this whole story is made up,” Omar tweeted Thursday night. “Sad she thinks bigotry gets her clout. Anti-Muslim bigotry isn’t funny & shouldn’t be normalized,” Omar said on Twitter. “Congress can’t be a place where hateful and dangerous Muslims tropes get no condemnation.” 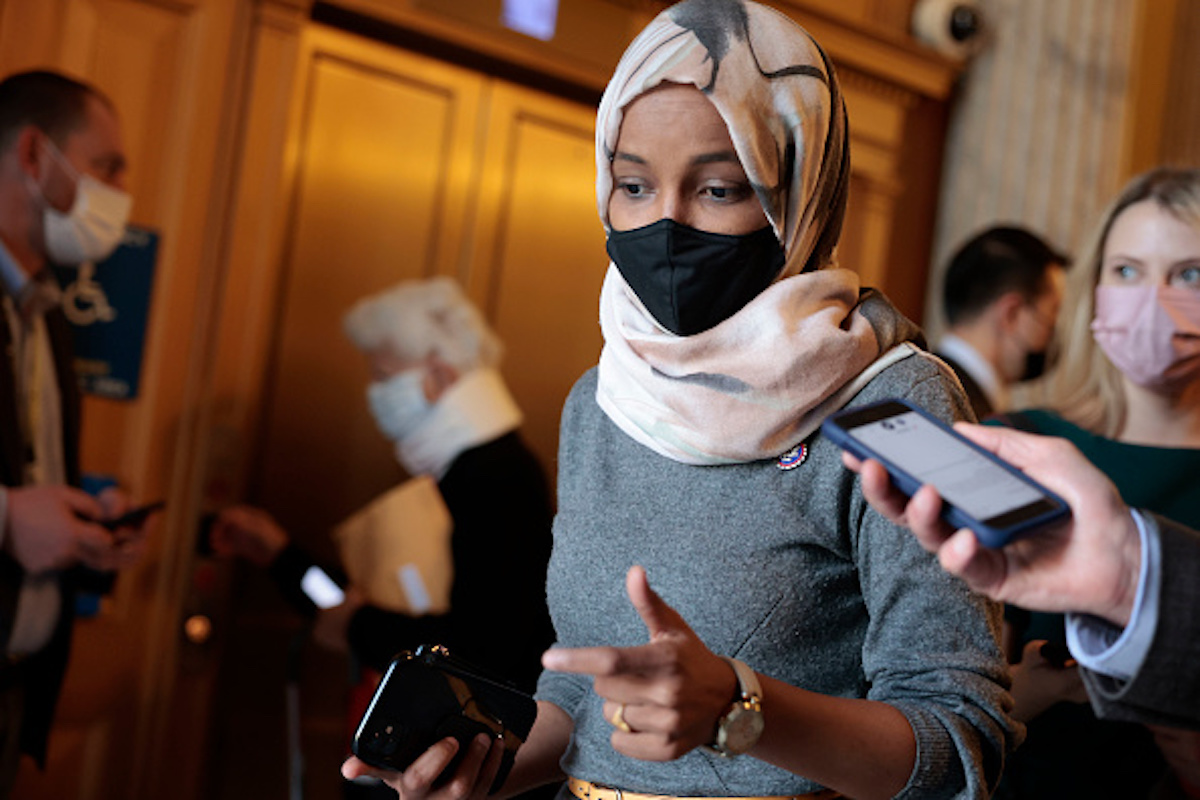 Rep. Ilhan Omar (D-MN) speaks with a reporter as she leaves the U.S. Capitol Building on November 16, 2021 in Washington, DC. (Photo by Anna Moneymaker/Getty Images)

Omar has received support from a number of members of the progressive Congressional group “the Squad” and others. (RELATED: Ilhan Omar Says Lauren Boebert ‘Shamefully Defecates’ On Congress After Colorado Rep Taunts Her Over ‘Husband-Brother’)

Omar called for Speaker of the House Nancy Pelosi and Minority Leader Kevin McCarthy to take action, saying “normalizing bigotry not only endangers my life but the lives of all Muslims.”

Saying I am a suicide bomber is no laughing matter. @GOPLeader and @SpeakerPelosi need to take appropriate action, normalizing this bigotry not only endangers my life but the lives of all Muslims. Anti-Muslim bigotry has no place in Congress. https://t.co/A0VxI3uTmH pic.twitter.com/QTmqaGaZrM

Omar’s office did not immediately respond to the Daily Caller’s request for comment.