Antisemitic incidents spiked across the UK over the first six month of this year,  a report released Thursday revealed.

The Community Security Trust (CST), a charity that monitors antisemitism in Britain, said there were 892 recorded incidents in the first six months of 2019 — a 10 percent increase compared to the same period last year.

The highest totals were in February and March, with 182 and 169 incidents respectively. These were months when Jews and antisemitism issues were prominent because of the continuing controversy over anti-Jewish sentiment consuming the Labour party under left-wing leader Jeremy Corbyn, the CST said.

In those two months, the trust recorded 55 incidents specifically related to allegations of antisemitism in the Labour party.

It is the highest number in this period since records began in 1984.

CST said reports of incidents have risen for a third year in a row, in a sign of Britain’s growing struggle with antisemitism. More than a third of the incidents involved social media, again a significantly higher proportion than in 2018. 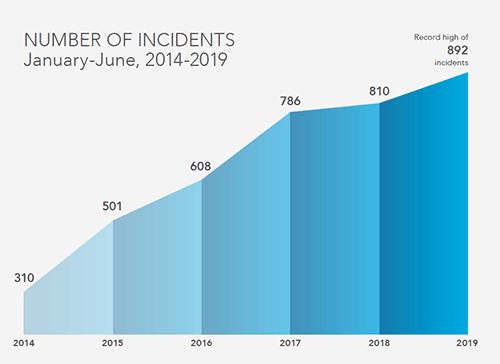 The CST said the data was likely to understate the scale of the problem, as campaigns directed at individuals could comprise hundreds or even thousands of tweets, images or posts within a concentrated timespan, but be recorded by the trust as a single incident.

“This is the third year in a row that CST has seen an increase in reports of antisemitic incidents,” said David Delew, the trust’s chief executive. “The problem is spreading across the country and online. It reflects deepening divisions in our society and it is causing increasing anxiety in the Jewish community. It will take people of all communities and backgrounds standing together to turn this tide of hate around.”

Two-thirds of the reported incidents were recorded in London and Manchester, two cities with large Jewish communities.

The number of violent antisemitic assaults rose from 62 in the first half of 2018 to 85 in the same period of 2019. None were classified by the CST as “extreme violence”.

Highlighting the number of incidents relating to rising antisemitism in the Labour party, Marie van der Zyl, president of the Board of Deputies of British Jews, said: “This makes shameful reading for the party’s leadership. They must finally take the steps required to rid their party of this appalling racism. Defeating the evil of antisemitism will take a concerted effort by the country’s political leadership and civil society to ensure that this country remains a safe and happy place for the Jewish community.”

Illinois Lt. Gov. Juliana Stratton on Highland Park Shooting: ‘Too Many Guns on Our Streets’