Here’s a round-up of the latest bombshell reports involving suspected blackmailer Jeffrey Epstein and his billionaire partner, Les Wexner, the owner of Victoria’s Secret and other major brands.

The foreign-born model who many have identified as an accomplice in procuring underage girls for Jeffrey Epstein is just as much a victim of the serial pedophile, according to official reports.

Incident reports from the Palm Beach Police Department’s 2005 investigation that were obtained by DailyMail.com claim that Epstein told at least one underage victim that Nada Marcinkova was his ‘Yugoslavian sex slave.’

Multiple girls also state that Epstein made them engage in sexual acts with Marcinkova, which eventually turned into threesomes with both himself and the model.

‘Epstein had purchased her from her family in Yugoslavia,’ wrote Detective Joseph Recarey after his interview with one victim.

‘Epstein bragged he brought her into the United States to be his Yugoslavian sex slave.’

Marcinkova would have been underage during most of the alleged incidents described by the victims to Detective Recarey.

Alex Jones asks: will Trump take action against censorship, or will he allow himself – and his base – to be destroyed? Now the world is asking why Trump isn’t doing anything against the mass censorship against free speech happening inside the US, which will deny him his re-election if he just sits on his ass.

Long before Jeffrey Epstein boasted of his billionaires-only client list—and long before his arrests for molesting underage girls in Florida and New York—the perverted financier was an eligible bachelor in the glossy pages of Cosmopolitan.

In July 1980, Epstein was featured as the magazine’s “Bachelor of the Month,” a tiny section advertising successful single men across the country. At the time, the future sex-offender was a Bear Stearns trader and asked potential dates to write him at the investment bank’s former headquarters in Lower Manhattan. 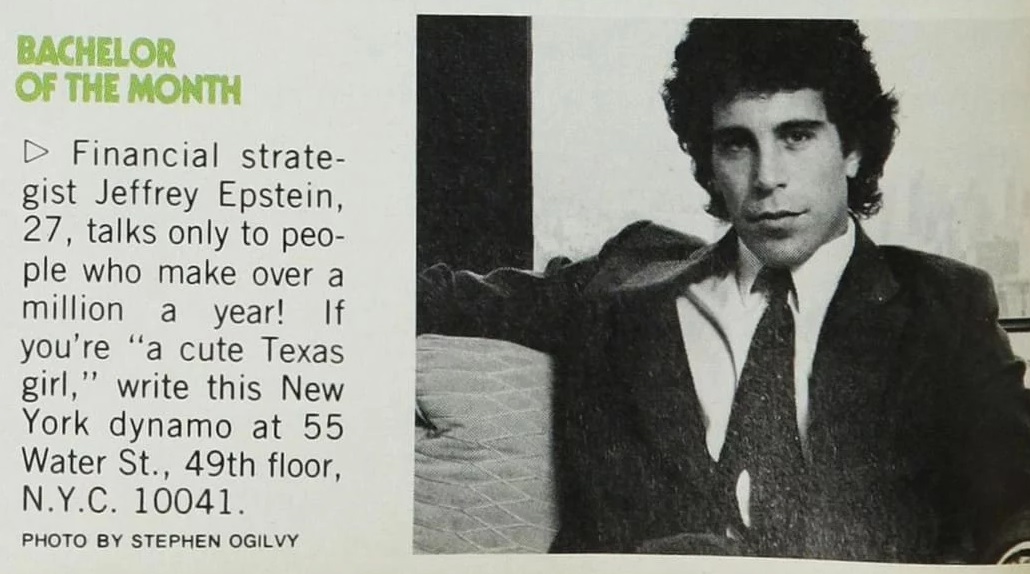 Epstein also claimed to speak only to millionaires, a prelude to his high-rolling lifestyle that included hobnobbing with Donald Trump, Bill Clinton and Prince Andrew, and amassing a collection of posh homes in Palm Beach, New York, Paris, and the U.S. Virgin Islands.

The personals ad, which included a photo of Epstein in a suit, portrayed him as a “New York dynamo” seeking “a cute Texas girl.” 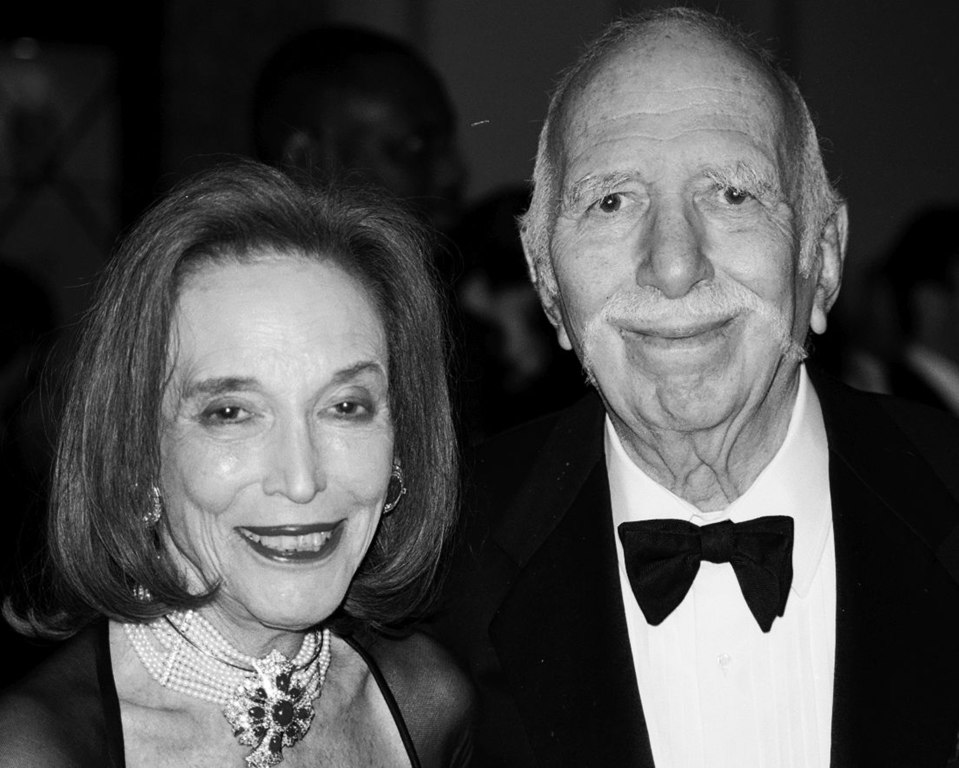 The two also attended lavish parties together in the late 1980’s.

From The Jewish Journal, “Jeffrey Epstein Donated $500,000 to an Elite Orthodox Prep School”:

One of Jeffrey Epstein’s private charities donated half a million dollars to the Ramaz School, an elite Orthodox Jewish prep school in New York City.

The foundation also donated to several other Jewish causes.

The Ramaz administration said in an email sent Tuesday evening that Epstein gave it “a significant gift” in 2007. Tax documents for the foundation show that the amount of the donation was $500,000.

[…] In the email, Ramaz said the donation was used to establish an educational program and that almost all of the money has since been spent.

Shocking new reporting from a progressive media outlet has linked elite billionaire pedophile Jeffrey Epstein to Charlie Rose, the now-disgraced mainstay of CBS’s 60 Minutes for decades. Rose was forced out of his comfortable mainstream media position in the aftermath of #MeToo claims against him, alleging that the legacy media titan had made a habit of harassing and groping young women.

DemocracyNow is a left-wing media outlet known for its critical editorial stance against establishment liberalism and the mainstream Democratic Party. The outlet sources anonymous former employees of Rose, who claim that they were referred to the sexual harasser by Epstein. One 22-year old woman describes her experience being peddled between the finance and media oligarchs as “being offered up for abuse.”

As I reported earlier this month, Weinstein is connected to Epstein through Israeli Prime Minister and the former head of Israeli Military Intelligence, Ehud Barak, who was seen entering Epstein’s house in New York in 2016 and also reportedly referred Weinstein to the Israeli firm Black Cube — a company run by a group of former Mossad agents — to try and shut down Ronan Farrow’s exposé against him by spying on his accusers.

EXCLUSIVE: Married Israeli politician Ehud Barak is seen hiding his face entering Jeffrey Epstein’s NYC townhouse as bevy of young beauties were also spotted going into mansion – despite his claim he NEVER socialized with the pedophile and his girlshttps://t.co/wQBJDkfVzt

Les Wexner handed Epstein “sweeping powers” over his finances. This despite Epstein having “a thin résumé & scant financial experience.”

Then “during the period in which he worked closely with Wexner, Epstein became extraordinarily rich.” #followthemoney https://t.co/GjBAIrW1xv

Wexner allegedly hired him as his “personal money manager” despite Epstein appearing to have no credentials.

From The New York Post, “California model says Jeffrey Epstein posed as a Victoria’s Secret scout to grope her”:

A California model claims convicted pedophile Jeffrey Esptein posed as a Victoria’s Secret scout and manhandled her more than a decade ago.

“His weapons were his hands,” Alicia Arden told the New York Times about the alleged May 1997 incident inside Epstein’s Santa Monica hotel room.

Arden, who was then 27 years old, claimed Epstein identified himself as a talent scout for Victoria’s Secret.

He then lured her back to his hotel room under the premise of her auditioning for the brand’s catalog, she said.

While inside the room, Epstein allegedly grabbed her, attempted to undress her and told her he wanted to “manhandle” her, the Times reported.

[…] Her claims are similar to those from another model — Elisabetta Tai — who alleged that Epstein posed as a Victoria’s Secret recruiter and attempted to grope her in 2004.

From Bloomberg, “Victoria’s Secret Has More Than a Jeffrey Epstein Problem”:

Jeffrey Epstein is supposed to be history at Victoria’s Secret—and at its parent company, L Brands Inc., for that matter—but he’s that skeleton that keeps rattling around the closet to remind everyone that he once was an all-too-lively part of the business. Epstein had a two-decade-long reign as close confidant, financial manager, and right hand to the corporation’s chief executive officer, Leslie Wexner. He even had the CEO’s power of attorney at one time.

Although he wasn’t an employee at Victoria’s Secret, Epstein also influenced the way the lingerie company operated, associating with the division’s chief marketing officer, Ed Razek. In 2005, for example, Razek was a guest at Epstein’s Manhattan mansion, welcomed by young women who said they were working as models for Epstein. Razek told fellow guest William Mook, head of Mok Industries LLC in Columbus, Ohio, that Victoria’s Secret used Epstein models and that his girls were in “the major league,” according to Mook.

Epstein’s relationship with Wexner and L Brands officially ended in 2007, a year and a half after the financier was charged with several counts of sexual misconduct in Florida. He pleaded guilty to one charge and spent just 13 months in jail with work release privileges. That penalty was widely derided as exceedingly lenient and, after sex trafficking charges against Epstein were resurrected in July, fresh outrage over the 2007 plea deal led to the resignation of U.S. Labor Secretary Alex Acosta, who’d been attorney general in Miami in charge of the prosecution. Epstein is now sitting in a Manhattan jail awaiting trial—and perhaps fresh revelations of salacious secrets. Last week he was found injured in his cell and put on suicide watch.

L Brands’ efforts to distance itself from Epstein may not have been all that clean a break. Epstein at one point had a $1 million investment in MC2 Model Management, according to a sworn deposition by a former company bookkeeper. MC2 is owned by Jean-Luc Brunel, a Frenchman who is alleged in a civil lawsuit to have brought girls as young as age 12 to the U.S. for sexual purposes and provided them to his friends including Epstein. Brunel even visited Epstein when he was first imprisoned in 2008. Victoria’s Secret continued to work with MC2-represented models after Wexner severed ties with Epstein. At least three MC2 models walked in Victoria’s Secret’s 2015 fashion show, and the agency’s models were at auditions in 2017 and 2018. They’ve also posed for its catalogs and website. In a 2014 letter to Brunel, his business partner, MC2 President Jeff Fuller, cited worries by Saks, Nordstrom, Macy’s, and other clients about Brunel’s friendship with Epstein. There was no mention of concern on the part of Victoria’s Secret.

Epstein was reportedly found “semi-conscious” and in a “fetal position” in his jail cell last week and his accusers are worried he won’t make it to a trial.

From Law and Crime, “‘I Do Question Whether It Was a True Suicide Attempt’: Victims’ Lawyer Worries Epstein Won’t Make It to Trial”:

A lawyer who represented three of Jeffrey Epstein‘s accusers more than a decade ago is apparently worried that Epstein didn’t really attempt suicide behind bars, suggesting instead that a “hit” to silence him forever would not be out of the question.

To Kuvin, it’s clear that the powerful men and/or women who occupy the pages of Epstein’s Rolodex would do anything in their power to keep Epstein from implicating them — presuming there’s a threat he would do so, of course.

“If he goes on trial, everyone he’s been in contact with will ultimately be fair game,” Kuvin continued. “There’s no doubt in my mind that no jail will protect you when there’s [sic] powerful people that want to reach you – wherever you are. If he’s going to implicate anyone in power that has the ability to reach in and somehow get to him – his life is definitely in jeopardy.”

On Wednesday, July 24, nearly a week after being denied bail, Epstein was found lying semi-conscious on the floor of his jail cell with marks on his neck. His cellmate, Nicholas Tartaglione, a former cop awaiting trial for a quadruple homicide, was questioned immediately after Epstein was found. According to a later report, however, Tartaglione claimed he saved Epstein’s life while the latter was attempting suicide. Both Tartaglione and his lawyer categorically denied that the inmate had assaulted Epstein.

As I highlighted earlier this month, a recent report from Vanity Fair said that “prominent Republicans” think Jeffrey Epstein “was a Mossad agent” who works for Israeli intelligence.