Roughly one-quarter of the world’s population is currently at risk from “once-in-a-century” floods, with nearly 70 percent of this demographic living across South and East Asia, the South China Morning Post reported on Tuesday citing a new assessment published by the journal Nature Communications.

In a report titled, “Flood exposure and poverty in 288 countries” published on June 28, authors including the World Bank’s Jun Rentschler wrote:

We find that about 1.81 billion people, or 23% of the world population, are directly exposed to inundation depths of over 0.15 meters. This would pose significant risks to lives and livelihoods, especially of vulnerable population groups. The majority (1.24 billion) are located in South and East Asia, where China (395 million) and India (390 million) account for over one-third of global exposure.

The analysis noted specific zones within India and China that are especially prone to flooding due to their locations along coastlines or river basins. 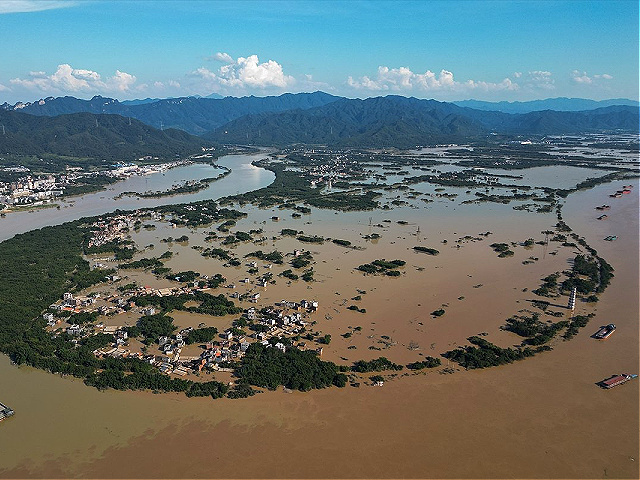 An aerial view of the flooding place as flooding grips in Yingde, Guangdong Province of China, on June 23, 2022. (Photo by Stringer/Anadolu Agency via Getty Images)

“In the Indian states of Bihar, Uttar Pradesh, West Bengal — all located along the Ganges River — a combined 196 million people live in high-risk flood zones, accounting for 33–53% of the states’ respective populations. […] In China, exposed populations are largest in provinces along the coast and Yellow River Valley,” the study’s authors observed.

China stands to suffer more economic damage than any other at-risk country in the world should it experience inundations of six inches or more. Economic activity in China worth an estimated $3.3 trillion would be jeopardized if the nation became subject to the once-a-century flooding, the report predicted. There is a one percent chance in any given year that such floods would occur in China.

The economies of the United States and Japan follow China in second and third place, respectively, in terms of nations considered at greatest economic risk due to flooding. The U.S. stands to lose $1.1 trillion, and Japan stands to lose $0.7 trillion should they face inundations over six inches.

Both India and China have endured record-high flooding in recent weeks as part of each country’s respective monsoon and rainy seasons. Chinese meteorologists said on Sunday that they expected dozens of provinces across the nation’s south and east to continue receiving heavy rainfall over the next several days.