Republicans and Democrats alike are blaming U.S. crises on foreign adversaries instead of themselves, writes Daniel Lazare.

A few things are clear after Robert Mueller’s testimony last week.  One is that the former special counsel is an out-of-touch figurehead who doesn’t even seem to have read his own report.  Another is that Russiagate is a stinking sack of excrement – as California Republican Tom McClintock more or less described it (quote starts at 3:40:45) – that Democrats would never again mention if they had half a brain (which they don’t).

A third is that America is now dominated by a war party that includes everyone on Capitol Hill other than a few isolationists on the right and the Bernie Sanders-Alexandria Ocasio-Cortez faction on the left.  To be sure, there’s disagreement as to whether the enemy is Russia or Iran.  But such minor details aside, the logic is otherwise the same.  Foreigners are out to get us.  They are responsible for all our troubles.  Americans must mobilize to stop them.

Elementary concepts like evidence meanwhile fall by the wayside.  During a visit to India last month, Mike Pompeo described Iran as “the world’s largest state sponsor of terror” (quote at 27:15).

No one asked the secretary of state to back up his fantastic assertion, which overlooks the obvious fact that Al Qaeda and ISIS are both Sunni extremist organizations that despise Shi’ite Iran as much as they despise the United States, if not more.  In June 2017, for instance, the Islamic State launched a devastating attack in Tehran that killed 17 civilians and wounded 43.  In September 2018, it attacked a military parade in the southwestern Iranian town of Ahvaz, killing 25.  Three months later, suicide car bombers belonging to Ansar al-Furqan, a militant Sunni group linked to Al Qaeda, killed two policemen and wounded 48 in the southeastern town of Chabahar.

Why would Iran finance terror when it’s the victim?  It doesn’t make sense.  But, then, reality, as Karl Rove once put it, is something that empires feel free to make up to suit their own purposes. 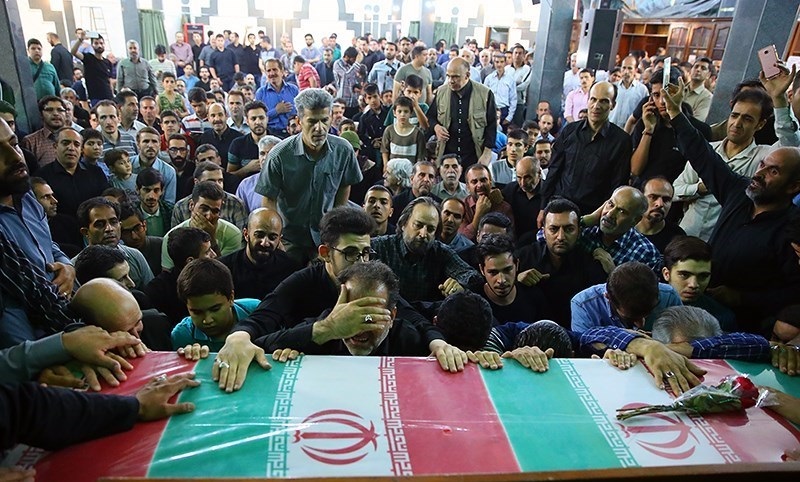 Iranians mourn the victims of ISIL attacks in 2017. (Tasnim News Agency, CC BY 4.0, via Wikimedia Commons)

Mueller’s assertion last Wednesday that Russia is interfering in U.S. elections similarly exists in an evidence-free terrain.  “It wasn’t a single attempt,” he declared in reference to misleading Facebook ads placed by a St. Petersburg, Russia, troll farm known as the Internet Research Agency. “They’re doing it as we sit here, and they expect to do it during the next campaign.”

The New York Times and Jeff Bezos’s Washington Post agreed with Mueller and issued howls of concurring outrage. But how did Mueller know that Russia was hacking away “as we sit here”?  What evidence does he have that they will do it in 2020? The answer is zero.  To paraphrase “The Treasure of the Sierra Madre,” the attitude seems to be: “Proof?  We ain’t got no proof.  We don’t need no proof.  I don’t have to show you any stinking proof.”

Indeed, proof of Mueller’s entire thesis is somewhere between scanty and nonexistent.  To be sure, the Internet Research Agency did purchase misleading ads in Facebook. But the amount it spent, roughly $44,000 prior to Election Day, was less than a thousandth of the collective Clinton-Trump social-media budget of $81 million.  Moreover, the ads themselves were so amateurish and inept – a drawing of a muscle-bound Bernie Sanders in a Speedo, a picture of Jesus arm wrestling a pro-Clinton Satan, etc. – that it’s hard to believe that they persuaded anyone at all.

“Sweeping and systemic,” to quote the Mueller report, this was not.  In October 2017, Facebook General Counsel Colin Stretch told the Senate intelligence committee that some 470 phony IRA accounts “collectively made 80,000 posts between January 2015 and August 2017,” which may have “reached as many as 126 million persons.”  Ominous as this may sound, two things are worth keeping in mind: (No. 1) fully half of this 32-month period either predates Trump’s candidacy or postdates his election; and (No. 2) American Facebook users received a total of 33 trillion posts over the same time span, a figure more than 400 million times greater.

Drop in the Bucket

The IRA campaign was thus a drop in the bucket. What’s more, there’s no evidence that Russia had anything to do with it.  In February 2018, when Mueller indicted the IRA, its owner Yevgeny Prigozhin, and 12 employees for fraud and illegal interference, he made no mention of a Kremlin link.  He was less circumspect in his report 14 months later, which describes the IRA effort as a “Russian interference operation.”  But the only proof it offers – at least in the expurgated version made public in April – is a 2018 New York Times article stating that Prigozhin is known as “Putin’s cook” because the Russian president dined at a restaurant he owns a few times in 2001 to 2003.

So glaring is the discrepancy that a federal judge presiding over the trial of an IRA sister company threatened to hold Mueller in contempt if he made any more statements about a supposed Kremlin connection.

As for hacking the Democratic National Committee, the other half of Mueller’s tale of Boris-and-Natasha-style derring-do, the cupboard is also bare.  Mueller’s July 2018 indictment of the Russian military agency known as the GRU (Glavnoye Razvedyvatel’noye Upravleniye, or Main Intelligence Directorate) suggests that some sort of break-in may indeed have taken place.

But even if it did, the news is hardly shocking in the wake of Edward Snowden’s June 2013 revelations about the National Security Agency harvesting millions of email and instant messaging contact lists, searching email content, invading computer privacy, and tracking and mapping cell-phone locations around the globe.  These are activities that put the GRU to shame.  Indeed, when German Chancellor Angela Merkel learned that she was one of 35 world leaders whose phone calls the NSA was routinely intercepting, she compared the agency to the Stasi.

The more important charge that the GRU not only hacked the DNC but passed along its findings to WikiLeaks doesn’t add up.  The problem is one of timing, as Consortium News pointed out the day the Mueller report was released.  On June 12, 2016, WikiLeaks founder Julian Assange announced that “leaks in relation to Hillary Clinton” were forthcoming.  Yet the Mueller report (volume one, page 45) says that WikiLeaks did not establish contact with the mysterious online persona known as Guccifer 2.0 until June 22.  If Guccifer is a GRU “cutout” created with the express purpose of passing data to WikiLeaks, why would Assange put out word 10 days before hearing from the supposed source?

The Mueller report adds that Guccifer did not send WikiLeaks its files until July 14. But how would this give WikiLeaks enough time to vet some 28,000 emails and other electronic documents before releasing them to great fanfare on July 22?  This was the massive email dump that revealed that the DNC had tipped the scales against Bernie Sanders and caused DNC chair Debbie Wasserman Schultz to resign.  But since WikiLeaks didn’t know Guccifer from Adam, how could it be sure that the material he supposedly forwarded was genuine and tamper-free?

The answer is it couldn’t, which is why Assange’s statement that “our source is not the Russian government and it is not a state party” is more believable than anything Mueller has had to say on the subject.  Mueller is the ex-FBI chief who told the Senate intelligence committee on the eve of the 2003 invasion of Iraq that Saddam Hussein’s weapons of mass destruction pose “a clear threat to our national security.”  Why trust him over a man whose record for veracity is still a hundred percent?

And why now?  Why are Republicans and Democrats both casting logic and evidence along the wayside in order to blame everything on countries like Russia and Iran?

The answer: growing social dysfunction into which the  current issue of Foreign Affairs magazine offers insight. The cover shows a bedraggled bald eagle alongside the question, “What Happened to the American Century?”  Inside, Editor Gideon Rose asks how things could “fall apart so quickly,” Fareed Zakaria bemoans the death of American hegemony, while Jacob S. Hacker and Paul Pierson observe that “[r]ising death rates among middle-aged white Americans are … a symptom of the virtual collapse of the federal government’s ability to address major public problems.”  Julia Azari of Marquette University adds that a “broken” political system has resulted in “a democracy that is simultaneously inclusive and ineffective.”

It’s an impressive list of woes, yet there’s so much more: an energy crisis due to over-reliance on fossil fuels; a climate crisis due to global warming; an economic crisis due to slowing growth rates and skyrocketing wealth polarization; a constitutional crisis due to an unrepresentative Electoral College and a grossly malapportioned U.S. Senate, and a foreign-policy crisis due to what historian Paul Kennedy once described as “imperial overstretch,” a concept that neocons such as Norman Podhoretz, George F. Will, and Jeane J. Kirkpatrick once dismissed, but which has returned with a vengeance since the invasion of Afghanistan and Iraq and other disasters.

It’s positively Job-like.  When a country has as many problems as these, the temptation to attribute it all to “foreign adversaries … intent on undermining American democracy” is overwhelming.  Why take responsibility for one’s own actions when it’s so much easier to blame someone else?

Daniel Lazare is the author of “The Frozen Republic: How the Constitution Is Paralyzing Democracy” (Harcourt Brace, 1996) and other books about American politics.  He has written for a wide variety of publications from The Nationto Le Monde Diplomatiqueand blogs about the Constitution and related matters at Daniellazare.com.