Three women reportedly accused Gordon Sondland of sexual misconduct before he was the U.S. ambassador to the European Union.

Sondland has been central to the ongoing impeachment inquiry into President Donald Trump. He testified Nov. 20 that Trump lawyer Rudy Giuliani requested Ukraine look into the Bidens in exchange for a White House meeting. (RELATED: Gordon Sondland Testifies He Told President Trump, Zelensky ‘Loves Your Ass’)

“There has never been mention of them in any form during the period of the allegations, although such a complaint could easily have been aired through multiple channels,” Sondland wrote in a statement. “These false incidents are at odds with my character.”

Vogel said that Sondland attempted to kiss her in a hotel room, and she deflected and quickly left. Later on, Sondland reportedly emailed asking her for a financial analysis for her business plan, adding: “Sorry I was such a dud.” This allegedly occurred in 2003 when Vogel was looking for investors to start a magazine.

The two met a second time to hash out details of the potential investment, she said. On this occasion, Sondland put his hand on Vogel’s mid-thigh for around 10 minutes, and she put her hand over his to prevent him from going further up, she said.

Afterward, Sondland pulled out of the investment deal. His lawyer said this was not because she rejected his alleged advances.

“As you are doubtless aware, one of the three complainants, Nicole Vogel, is the owner and publisher of the Portland Monthly,” a letter from Sondland’s lawyer reads, according to ProPublica and Portland Monthly. “She and her publication stand to benefit directly from publishing these allegations, and Ms. Vogel’s delay in bringing these forward — even as Ambassador Sondland was undergoing public scrutiny by Congress as part of his confirmation in 2018 — casts grave doubt on her credibility. Indeed, we understand that Portland Monthly is under significant financial pressure and Ms. Vogel’s efforts seem designed to salvage it.”

Solis said she met Sondland in 2008 when a colleague asked her to meet with him because of his hotel experience. Sondland was allegedly flirting throughout the meeting and then hired Solis on the spot as his “new hotel chick.” On their way out, Solis said Sondland slapped her “on the ass.”

Solis said she met Sondland again, this time at his request. He offered her a tour of his art collection at his home, and the tour eventually moved to the pool house. Here, Solis said that she asked to use the restroom.

“I get out to the pool house, and he is now naked from the waist down,” Solis said. “He said something about, ‘I thought we could chat.’ And I said something, trying to keep his ego intact — not that he needed that, not that it wouldn’t have been anyway — I said something like, ‘I can’t have that conversation.’” 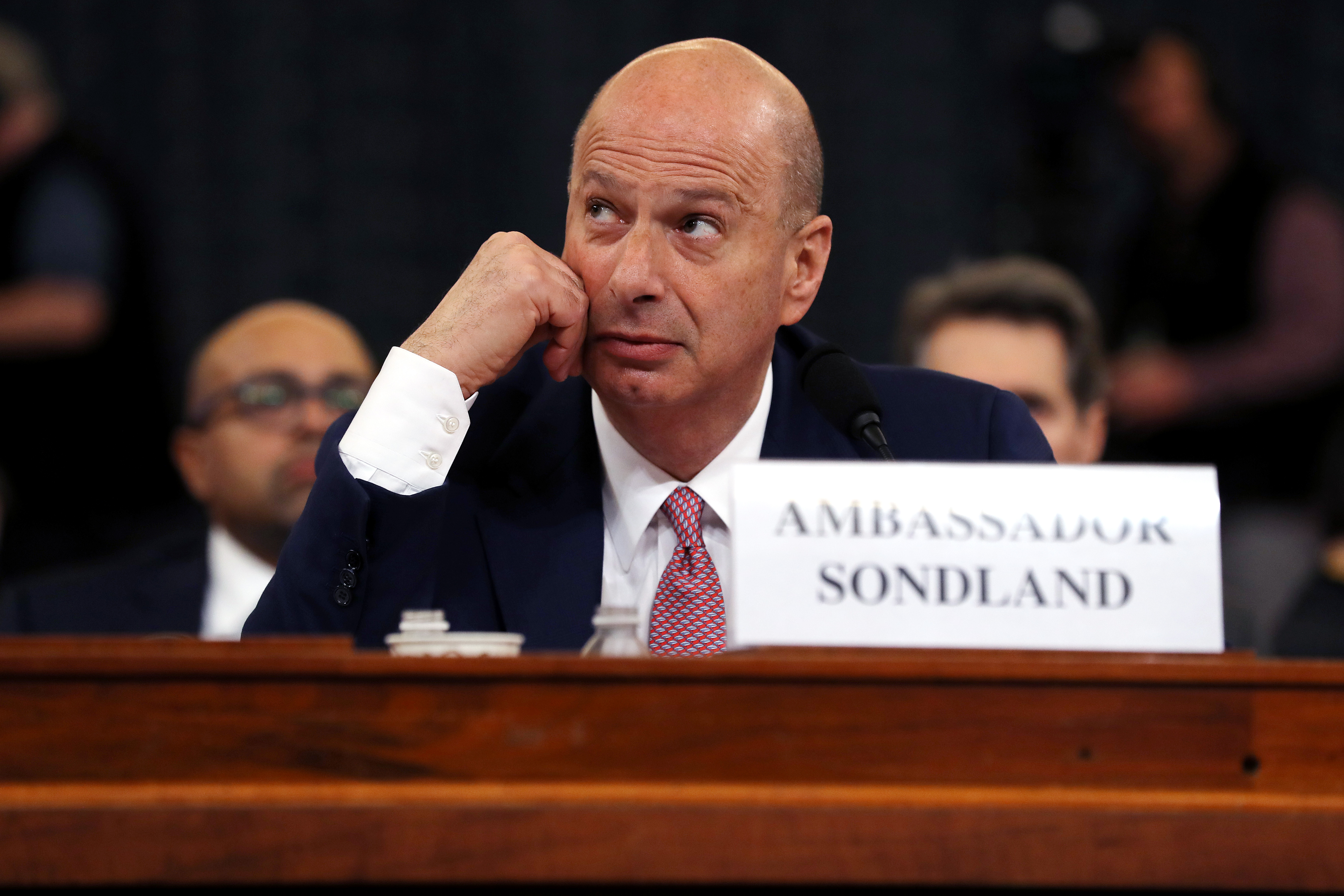 Sondland put his pants back on after Solis says she apologized for potentially giving him the wrong impression. The two met on a third occasion a few months later when she was inspecting and having staff training sessions at his hotel properties. He invited her to see the penthouse, which she was unaware was one of his homes, Solis said.

“The next thing I know, he’s all over me,” Solis said. “He’s on top of me. He’s kissing me, shoving his tongue down my throat. And I’m trying to wiggle out from under him, and the next thing you know, I’m sort of rising up to get away from him, and I fall over the back of the couch.”

Solis’s former husband backed up her account and said that she was upset upon arriving home, ProPublica and Portland Monthly reported. Sondland’s lawyer denied these claims, too. Sondland ended up leaving the account with the company Solis worked for.

“We have been able to review Provenance’s records interacting with Ms. Solis’s company, and at no time did she or her employer convey any concern about Ambassador Sondland, his comportment, or the nature of any business dealings he had with them or their personnel,” the lawyer wrote.

Sept said she had a 2010 breakfast with Sondland, which sparked multiple other outings. She said how comfortable she felt with Sondland as the two had many personal connections. During one dinner, Sept said she came back from the bathroom and Sondland insisted that she sit beside him in a booth.

She allegedly cut the evening short and Sondland tried to kiss her outside of her car. Sept said she sent a follow-up email after the dinner to schedule a meeting an attempt to “maintain professionalism.” Sondland did not reply, according to her account.

“Ambassador Sondland did discuss Ms. Sept’s job prospects with her, but he denies any unwanted touching. He specifically denies attempting to kiss her, along with her claim that she pushed him away,” his lawyer wrote.

“The fact that [Sondland] uses his power to terrorize people who he perceives as having less power is really disgusting,” Sept said. “I want other women to feel comfortable to share their stories, and be believed.”