Republican Arkansas Sen. Tom Cotton said Wednesday that Democrats have discarded Bill and Hillary Clinton’s “safe, legal, and rare” stance on abortion because it implies that there is “something wrong about the practice.”

Cotton questioned Democratic Texas State Rep. Donna Howard on her abortion stances Wednesday during a Senate Judiciary Committee, asking Howard whether she agreed with the Clintons that abortion should be “safe, legal, and rare.” (RELATED: The Clintons Coined The Phrase ‘Safe, Legal And Rare,’ But Abortion Activists Say This Is Stigmatizing)

“I would think that there’s a lot of options that we could put in place that would limit the need for abortion in terms of supporting healthcare for women, access to contraceptives, making sure that they have insurance coverage or Medicaid coverage,” Howard told Cotton.

“There are many things that we could do that would give them more choice in their own, how they have healthcare, so that they don’t necessarily have an unwanted pregnancy,” she continued. “But when they do have one, I think they have a right to make the decision about whether or not they want to continue that pregnancy.”

Cotton fired back at Texas representative, telling her that her “unwillingness to say yes” demonstrates his point that “Democrats today will not concede what Bill and Hillary Clinton conceded, that abortion should be rare, because it implies that there is something wrong about the practice.”

“It is wrong and the Democrats will no longer recognize that it is wrong,” he said. (RELATED: Hillary Clinton: Tulsi Is A ‘Favorite Of The Russians’)

“Our vision should be of an America where abortion is safe and legal but rare,” said Bill Clinton in January 1993 as he explained the Clinton administration’s attempts to reduce abortions.

The former U.S. president echoed these sentiments during his presidential nomination acceptance speech in 1996, saying, “We respect the individual conscience of every American on the painful issue of abortion but believe as a matter of law that this decision should be left to a woman, her conscience, her doctor and her God. But abortion should not only be safe and legal; it should be rare.”

Hillary Clinton has also repeatedly used the phrase to discuss how abortions should be approached. On the campaign trail in 2005 she said: “We can support a woman’s right to choose that makes abortions safe, legal and rare and reduces the number of abortions.”

The former first lady also re-iterated the sentiment during her 2008 presidential run, saying, “By rare, I mean rare,” but later tweaked her language during the 2016 presidential election and said abortion should be merely “safe and legal.”

“I agree with Hillary Clinton on one thing, disagree with her on many others, but when she said abortion should be safe, legal and rare, I think she’s correct,” Gabbard said in October 2019. Her comments were widely criticized by abortion advocates, though former Planned Parenthood President Leana Wen defended her. 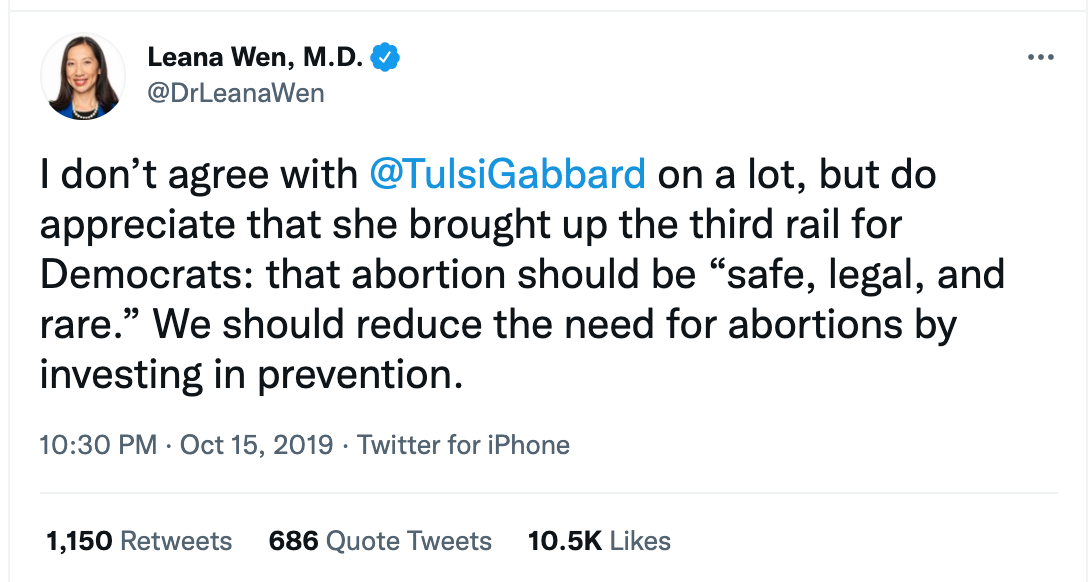