The Trump administration is seeking to terminate the Flores settlement, an immigration-related court order that prevents most migrant family units from being held in detention centers for more than 20 days, the Daily Caller has learned.

Eliminating the Flores settlement would allow the U.S. government to hold migrant children and their families indefinitely while they await court proceedings. The 1997 Flores v. Reno decision by the Supreme Court laid out specific conditions under which unaccompanied migrant children could be held in detention, and was later expanded to place time restrictions on the detention of migrant children accompanied by family members.

“Today the Administration is closing one of the legal loopholes that has allowed human traffickers and smugglers to exploit our vulnerabilities at the southern border,” a senior administration official told the Daily Caller. “President Trump has made it clear that he’s going to secure America’s border at all cost and this rule plays a vital role in the strategy to restore the integrity to our immigration system and our national security.”

The Department of Homeland Security (DHS) first rolled out a plan to terminate Flores last September via a rule change in the federal register, but later asked Congress to modify the agreement on its behalf. (RELATED: Trump Officials Want Lawmakers To Fix Flores Agreement)

The agreement has been a thorn in the side of the Trump administration since last summer, when DHS attempted to get around the Flores settlement by separating families at the border. The adults in a family unit could then be detained while awaiting court hearings, while the children were held elsewhere. However, the administration ended that practice after severe backlash.

The Trump administration has thus considered the settlement to be a “loophole” that allows illegal immigrants to take advantage of the immigration system. The number of family units crossing the southern border has skyrocketed in the past year, which immigration officials believe is at least partly due to the expectation that migrant adults who arrive with children will quickly be released into the U.S. In February, U.S. Customs and Border Protection (CBP) announced that they detained 290% more family units this fiscal year than they had in the same timeframe the previous year. 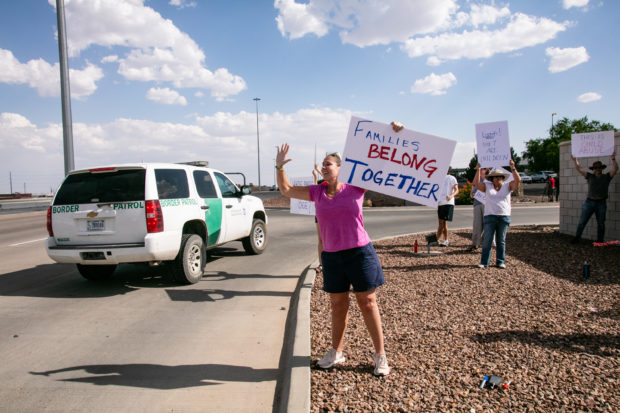 EL PASO, TX – JUNE 25: Kris Brikman from Palo Alto California joined the Caravan to Clint, TX to protest the continued seperation of migrant children form their families and the conditons they are being held by CBP. The protest was organized by Julie Lythcott-Haims from norther California on June 25, 2019 in El Paso, Texas. (Photo by Christ Chavez/Getty Images)

Many families do not return for their court proceedings once they have been released into the U.S., and others fail to meet the final threshold for being granted asylum.

“Out of every 100 credible fear claims, on average, only about 12 result in a grant of asylum by an asylum judge,” the Department of Justice’s Executive Office for Immigration Review said in a review last May.

In some cases, children are passed back over the border to accompany a different adult or group of adults, a practice that DHS refers to as “recycling rings.”

“From what I understand … the smuggling organizations or cartels have use of young children to pair with adults because they know family units will not be separated upon crossing the border illegally,” National Border Patrol Council president Brandon Judd told the Daily Caller in March. “The use of children as pawns allows the cartels to recruit people to cross the borders illegally, thereby allowing them to generate profits.”

The termination of the Flores Settlement will likely face legal challenges from immigrant activist groups who accuse the administration of detaining immigrants without proper due process. Immigration courts have faced serious backlogs with the surge of migrants crossing the border, meaning cases can take years to be resolved, although cases generally move more quickly when the subject of the case is being held in detention.

The Trump administration has asked Congress for funding for more immigration judges in at attempt to clear some of the backlog.