President Trump Tuesday afternoon revealed to reporters his short list of candidates to replace former national security adviser John Bolton. He presented his “top 5 candidates” which had been whittled down from 15 he was previously reported to be considering.

Per Axios the finalists are:

Obviously the choice comes at a very sensitive point, given this week’s Saudi Aramco attacks and a potential crisis for global oil markets, and after a summer of escalating tensions with Iran which has put Washington and Tehran on a path to war.

There’s also a potential changing of the guard in Israel, with a major election unfolding on Tuesday which could make or break Prime Minister Benjamin Netanyahu and his hawkish Likud Party.

The US has further seen relations with NATO member Turkey at a historic low point, as well as deeply uncertain and worsening future relations with Moscow, which remains a big question mark. And further there’s the Afghan quagmire, now almost at two decades, which the US can’t seem to get out of.

John Bolton never should have been hired. I hope the president’s next national security adviser will focus on securing peace, not expanding war.

A CNN infographic published last week included most of the names Trump on Tuesday said made up his short-list; however, Robert O’Brien and Lisa Gordon-Hagerty appear unexpected mentions as part of Trump’s “top 5”. 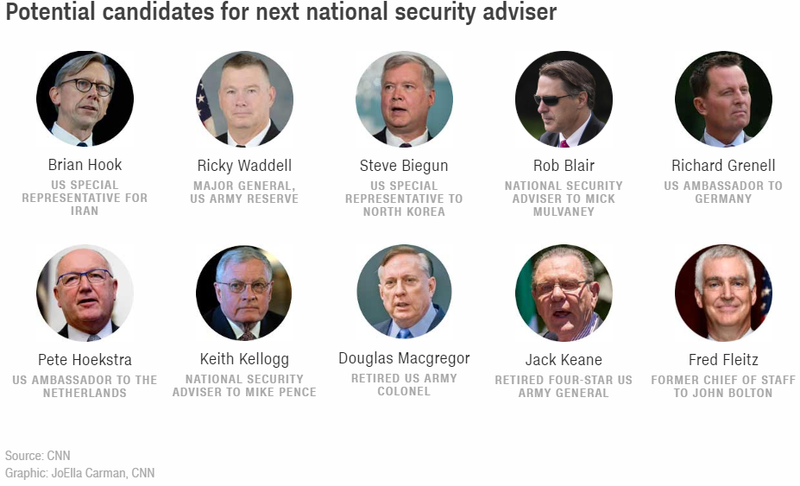 Following Bolton’s departure, the new national security adviser will be Trump’s 4th in less than 3 years.