Authored by Simon Watkins via OilPrice.com:

With the U.S, Russia, and China all jostling for position in Iraq’s oil and gas industry both north and south, Iraq’s oil ministry last week reiterated its desire to have one or more foreign partners in the Mansuriya gas field. Situated in Diyala province, close to the Iran border, Mansuriya is estimated to hold around 4.6 trillion cubic feet of natural gas, with plateau production projected at about 325 million standard cubic feet per day. 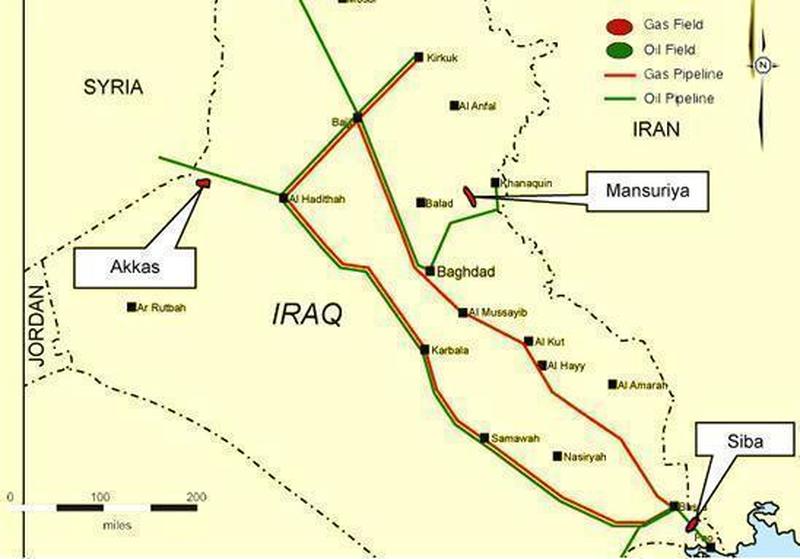 For the U.S., encouraging Iraq to optimise its gas flows so that it reduces its dependency for power from Iran is the key consideration.

For Russia, Rosneft essentially bought control of the semi-autonomous region of Kurdistan in northern Iraq in November 2017, so power in southern Iraq figuratively will complete the set.

Securing oil and gas contracts across all of Iraq will allow Russia to establish an unassailable political sway across the entire Shia crescent of power in the Middle East, stretching from Syria through Lebanon (by dint of Iran), Jordan, Iraq (also helped by Iran), Iran itself, and Yemen (via Iran). From this base, it can effectively challenge the U.S.’s vital oil, gas, and political ally in the region – Saudi Arabia. China, in the meantime, is operating to its own agenda in South Pars Phase 11 and its West Karoun holdings.

Iraq, like Turkey, is still – nominally at least – not committing to either the Russia or the U.S., preferring to play each off against the other for whatever they can get, and the same applies in microcosm to the field of Mansuriya. Turkey itself was a key player in this gas field through its national oil company Turkiye Petrolleri Anonim Ortakligi (TPAO) until the middle of last year – holding a 37.5 per cent stake – along with the Oil Exploration Company (25 per cent), Kuwait Energy (22.5 per cent), and South Korea’s KOGAS (15 per cent).

TPAO had signed the original development deal for Mansuriya back in 2011, promising Iraq’s oil ministry that it could be trusted to reach plateau production within 10 years at most, a senior figure in the ministry told OilPrice.com last week. This was not an unreasonable schedule, for which TPAO would be remunerated US$7.00-7.50 per barrel of oil equivalent, a relatively generous amount compared to many of the previous awards from the ministry. TPAO agreed that the first phase would mean production of at least 100 million cubic feet a day within 12 months from the signing date.

Unsurprisingly, given the rise of Islamic State at the time, TPAO suspended all operations on Mansuriya in 2014, but more surprisingly was that it refused to resume development work in September 2017 when asked to do so by then-oil minister, Jabar al-Luaibi. There were many subsequent requests from the ministry to TPAO to resume work before the ministry rescinded the contract last July.

As it stands, Iraq’s oil ministry has made it clear that it needs Mansuriya to be properly up and running and gradually increasing production towards the 325 million standard cubic feet per day figure so that it can be used as a feedstock for the country’s calamitous power sector. Peak summer power demand every year exceeds domestic generation capacity, frequently leading to up to 20 hours per day of blackouts in many areas. Without Mansuriya and similar gas fields coming online, this will get worse, as Iraq’s population is growing at a rate of over one million per year, with electricity demand set to double by 2030, according to the International Energy Agency.

This supply-demand imbalance has resulted in Iraq’s being dependent on neighbouring Iran for a considerable amount of gas and electricity imports – around one third of its total energy supplies, in fact. Specifically, Iraq pipes in up to 28 million cubic metres of Iranian gas a day for power generation and also directly imports up to 1,300 megawatts of Iranian electricity. Even the U.S. has been forced to grant waivers for Iraq to continue to do this, given the absence of other options currently.

Playing the game of pitting one side against the other for optimal gain, the Secretary General of the Iran-Iraq Joint Chamber, Seyed Hamid Hosseini, stated recently that Iran’s gas and electricity exports to Iraq are expected to reach US$5 billion by the end of the current Iranian calendar year, ending on 21 March 2020. This comment was made at the same time as a U.S. consortium led by Honeywell signed a memorandum of understanding for a deal that would reduce the country’s current level of gas flaring by nearly 20%. Part of this deal included processing associated gas at the Siba gas field, the original deal for which was also done in 2011 and also with TPAO.

In the running at the time for both fields was Russia. So interested is it in securing gas sites in north and south Iraq, which it will eventually be able to move via its vast pipeline capabilities and networks, that even before the latest announcement on Mansuriya’s availability was made public, Gazprom Neft (the oil arm of Russia’s gas giant, Gazprom) communicated to Iraq’s current oil minister, Thamir Ghadhban, that it was ‘very interested’ in taking a role in the Mansuriya field.

“Gazprom Neft often acts as the point man for Gazprom in initial conversations, as it is a slick, well-run, Western-style company, whereas Gazprom is a bit more old-style Soviet,” said the Iraq source. “It [Gazprom Neft] also made it clear that it would be interested in other sites, such as Siba,” he added. “It should be remembered that Gazprom was in the prime position to develop the other key gas fields of North Pars, Kish, and Farzad A and B before the U.S. withdrew from the JCPOA [Joint Comprehensive Plan of Action] last year,” he concluded.

It is all Russian Propaganda – Tucker Carlson says so (wink, wink…) [Video]