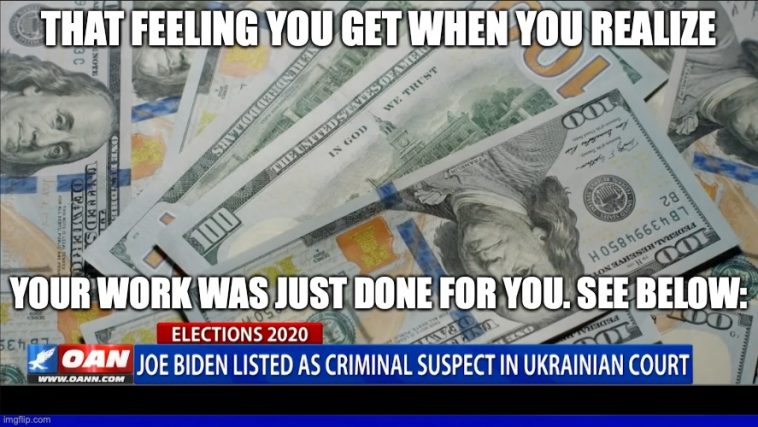 Well, it was a long time coming, and probably nobody expected this. In May of this year, Ukraine made it official: Joe Biden got listed as a criminal suspect for his quid pro quo, a.k.a. bribe (at least in a political sense) of US 1$ billion in exchange for the firing of a prosecutor investigating the activities of his son Hunter, with Burisma Holdings, a reputedly very corrupt enterprise in Ukraine.

This is not an idle allegation. We have video of what Joe Biden did, because he openly bragged about doing it. Remember this?

Now to be sure, the legal status we described above is a lot less severe than it sounds. This does not apparently mean that the Ukrainian government would arrest Mr. Biden once he is on Ukrainian soil. Rather, it appears to be a procedural matter.

Here is that May report:

However, the American Senate also compiled a report, released on September 18th, but apparently largely lost to the news cycle. However, as taken directly from the table of contents of this report, look at these section headlines:

This looks like a fascinating study and future pieces may offer some deep dives into each section. But let’s have a look at the conclusion reached by the Senate Committee on Homeland Security and Government Affairs. This is no “Russian propaganda”, it is simply repeating word for word what the Committee findings were. We are offer the entire conclusion with no emphases or redaction, but we did edit it so that the numbered footnotes appear in a list after the body text concludes. If interest is piques about this, we will offer deep dives into the text of this full report. If there is not much interest, do not complain when Joe Biden becomes president and launches the US into a major nightmare. Don’t say nobody warned you!!!

As the Chairmen’s report details, Hunter Biden’s role on Burisma’s board negatively impacted the efforts of dedicated career-service individuals who were fighting to push for anticorruption measures in Ukraine. Because the vice president’s son had a direct link to a corrupt company and its owner, State Department officials were required to maintain situational awareness of Hunter Biden’s association with Burisma. Unfortunately, U.S. officials had no other choice but to endure the “awkward[ness]” of continuing to push an anticorruption agenda in Ukraine while the vice president’s son sat on the board of a Ukrainian company with a corrupt owner. As George Kent testified, he “would have advised any American not to get on the board of Zlochevsky’s company.”[429] Yet, even though Hunter Biden’s position on Burisma’s board cast a shadow over the work of those advancing anticorruption reforms in Ukraine, the Committees are only aware of two individuals who raised concerns to their superiors. Despite the efforts of these individuals, their concerns appear to have fallen on deaf ears.

Several witnesses highlighted efforts to enable a successful investigation of Zlochevsky, and also noted that the U.S. decision to condition a $1 billion loan guarantee was made in part because of the then-Ukrainian prosecutor general’s failure to pursue a case against Zlochevsky. But at the end of the day, between 2014 through 2017, despite the concerted effort of many U.S. officials, not one of the three different Ukrainian prosecutor generals held Zlochevsky accountable.

The Obama administration and the Democrat lobby shop Blue Star Strategies had consistent and extensive contact with Andrii Telizhenko over a period of years. Yet despite these well-documented contacts with Democratic officials, Democrats have attempted to impugn this investigation for having received some Blue Star-related records from Telizhenko. Some Democrats have even (incorrectly) identified Telizhenko as the Committees’ “star witness.”[430] Although he produced a small number of Blue Star-related records to the Committees, the Committees never interviewed him as part of this investigation.[431]

Even though almost all of the Committees’ records are from U.S. agencies and U.S. officials or persons, Democrats have repeatedly misconstrued the facts of this investigation and have smeared it as a Russian disinformation campaign. In doing so, they conveniently have ignored their own long history of meeting with Telizhenko and his yearlong work for a Democrat lobby shop. If Democrats are concerned that Telizhenko presents any risk of advancing disinformation, it is notable that the Ranking Members have not expressed any curiosity about his work with the Obama administration or Blue Star Strategies.

The records acquired by the Committees also show that Hunter Biden and his family were involved in a vast financial network that connected them to foreign nationals and foreign governments across the globe. Hunter Biden and Devon Archer, in particular, formed significant and consistent financial relationships with the corrupt oligarch Mykola Zlochevsky during their time working for Burisma, and their firms made millions of dollars from that association while Joe Biden was vice president and the public face of the Obama administration’s Ukraine policy. Rosemont Seneca Thornton, an investment firm co-founded by Hunter Biden, received $3.5 million in a wire transfer from Elena Baturina, who allegedly received illegal construction contracts from her husband, the then-mayor of Moscow. Moreover, Archer’s apparent receipt of money for a car from Kenges Rakishev of Kazakhstan while Vice President Biden was in Kyiv is especially concerning in light of the timing. And finally, Biden and Archer’s work with Chinese nationals connected to the Communist regime illustrate the deep financial connections that accelerated while Joe Biden was vice president and continued after he left office.

The Chairmen’s investigation has faced many obstacles from the minority and from executive agencies that have failed to comply with document requests. Accordingly, there remains much work to be done.

[431] The Committees received a small number of records from Telizhenko related to his communications with and subsequent work for Blue Star Strategies. Ranking Member Peters and Ranking Member Wyden have access to these records but have refused to receive or review them. Had they done so, they would have observed that the State Department, National Archives, and Blue Star Strategies (after it received a subpoena) produced most of the same records to the Committees. They also would have noticed the emails and text messages that Blue Star failed to produce to the Committees.

On February 4th, the greatest investigative news report that has ever been done was issued. Will it win any awards?