The biggest reason for last week’s torrid stock market rally was rekindled “optimism” that the escalating trade war between the US and China may be on the verge of another ceasefire following phone conversations, fake as they may have been, between the US and Chinese side. This translated into speculation that a new round of tariffs increases slated for this weekend may not take place or be delayed.

However, that did not happen, and with no trade deal in sight, at 12:00am on Sunday, the Trump administration slapped tariffs on $112 billion in Chinese imports, the latest escalation in a trade war that’s ground the global economy to a halt, sent Germany into a recession, and given the market an alibi to keep rising because, wait for it, “a trade deal is imminent.”

Only, it isn’t, and 1 minute later, at 12:01am EDT, China retaliated with higher tariffs being rolled out in stages on a total of about $75 billion of U.S. goods. The target list strikes at the heart of Trump’s political support – factories and farms across the Midwest and South at a time when the U.S. economy is showing signs of slowing down.

The 15% U.S. duty hit consumer goods ranging from footwear and apparel to home textiles and certain technology products like the Apple Watch. A separate batch of about $160 billion in Chinese goods – including laptops and cellphones – will be hit with 15% tariffs on Dec. 15. China, meanwhile, began applying tariffs of 5 to 10% on U.S. goods ranging from frozen sweet corn and pork liver to bicycle tires on Sunday.

The slated 15% U.S. tariffs on approximately $112 billion in Chinese goods may affect consumer prices for products ranging from shoes to sporting goods, the AP noted, and may mark a turning point in how the ongoing trade war directly affects consumers. Nearly 90% of clothing and textiles the U.S. buys from China will also be subjected to tariffs. 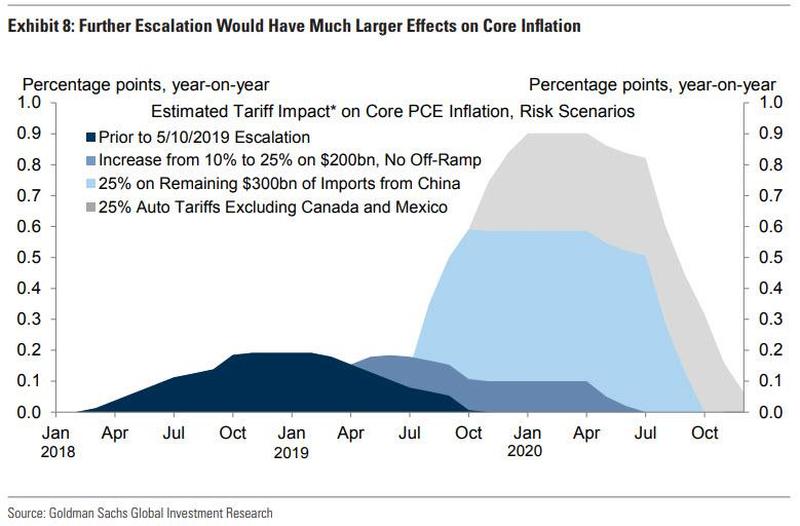 Until today, the Trump administration has avoided tariffs on consumer goods – even as the president claimed that only China was paying for tariffs – and consumer spending has remained high amid slowdowns in other economic areas such as investment spending and exports.

President Trump’s economic advisors, Larry Kudlow and Peter Navarro, have consistently argued the trade conflict will not or will minimally affect consumers, although the stated reason for the delay in another $160bn in tariffs on consumer goods until Dec. 15 is precisely due to the administration’s fear of a price shock ahead of the holidays.

Beijing has vowed retaliatory tariffs that, combined with the Sunday increases, would cover $75 billion in American products once the Dec. 15 tariffs take effect.

As expected, Chinese state media on Sunday knocked the U.S. for the continuing tariffs, arguing they would hurt American interests as well, according to Reuters.

“The United States should learn how to behave like a responsible global power and stop acting as a ‘school bully,’” the official Xinhua news agency said, Reuters noted.

China has repeatedly slammed US pressure tactics, with signs that its officials are girding for a prolonged confrontation.

“China’s determination to fight against the U.S. economic warmongering has only grown stronger, and its countermeasures more resolute, measured and targeted,” according to a commentary by the official Xinhua News Agency after the tariffs kicked in. One thing that “White House tariff men should learn is that the Chinese economy is strong and resilient enough to resist the pressure brought about in the ongoing trade war.”

And speaking of economic impact, the Congressional Budget Office has projected that by 2020, Trump’s tariffs and trade war will reduce the level of real U.S. GDP by about 0.3% and reduce average real household income by $580.

Separately, JPMorgan has estimated that the latest round of tariffs will increase the average cost per U.S. household to $1,000 a year – up from $600 for duties enacted last year. That estimate is in the low range because it was based on a duty rate of 10%, before Trump increased it to 15%. 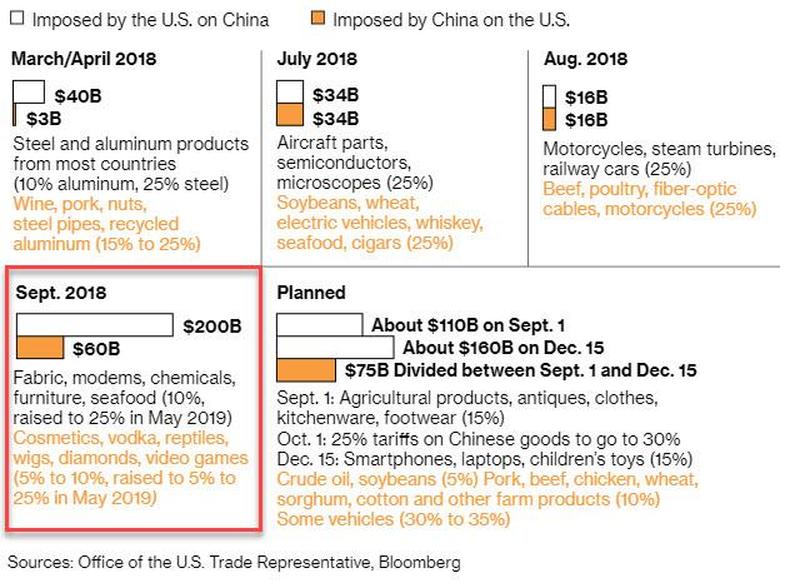 As Bloomberg reports, about 90% of California-based JLab Audio’s headphones and other wireless products targeted for duties got hit Sunday, possibly hurting holiday sales and forcing a delay in hiring, CEO Win Cramer said. About 40% of the company’s sales come in the fourth quarter, he said.

“If I had hair, I’d be pulling it out,” Cramer said. “I’m really concerned about the financial performance of the business, knowing that if we continue to eat this cost, how much it hurts.”

Well, Cramer, just pass the costs along to the consumer. Supposedly the economy is super strong, and higher inflation is precisely what the Fed wants, so win-win-win, right?

Others were just as vocal in their criticism of Trump’s trade war: Gary Shapiro, president of the Consumer Technology Association, said the Trump administration’s approach of using tariffs to pressure China into a deal has backfired.

“U.S. companies have to spend more resources on constantly changing trade rules and less on innovation, new products and our economic health,” Shapiro said. “This is not how you reach a meaningful trade agreement.”

Among the higher Chinese duties that took effect Sept. 1 include an extra 10% on American pork, beef, and chicken, and various other agricultural goods, while soybeans will get hit with an extra 5% tariff on top of the existing 25%.

Starting in mid-December, American wheat, sorghum, and cotton will also get a further 10% tariff. While China imposed a new 5% levy on U.S. crude oil starting from September, there was no new tariff on liquefied natural gas.

The resumption of a suspended extra 25% duty on U.S. cars will resume Dec. 15, with another 10% on top for some vehicles. With existing general duties on autos taken into account, the total tariff charged on U.S.-made cars would be as high as 50%.

While the Trump administration has dismissed concern about a protracted trade war, business groups are calling for a tariff truce and the resumption of negotiations between the world’s two-largest economies. On Friday, Trump told reporters that face-to-face talks between Chinese and American trade negotiators scheduled for Washington in September are still happening “as of now,” before going to Camp David, the U.S. presidential retreat.

“We’re going to win the fight,” he said.

Alex Jones exposes the leftist media owned by China and their blatant attempt to propagandize the American people to back a Chinese coup of America.