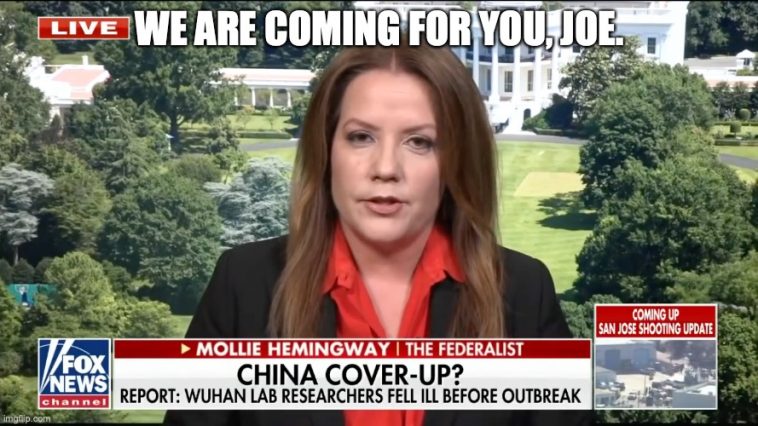 President Trump thought that COVID might have been lab-originated when it broke out. The BBC still has this report on file, available through Trump-hating Google, dated May 1st, 2020. Here are some excerpts from that story:

US President Donald Trump has appeared to undercut his own intelligence agencies by suggesting he has seen evidence coronavirus originated in a Chinese laboratory.

Earlier the US national intelligence director’s office said it was still investigating how the virus began.

But the office said it had determined Covid-19 “was not manmade or genetically modified”.

China has rejected the lab theory and criticised the US response to Covid-19.

At the White House on Thursday, Mr Trump was asked by a reporter: “Have you seen anything at this point that gives you a high degree of confidence that the Wuhan Institute of Virology was the origin of this virus?”

“Yes, I have. Yes, I have,” said the president, without specifying. “And I think the World Health Organization [WHO] should be ashamed of themselves because they’re like the public relations agency for China.”

He also told reporters: “Whether they [China] made a mistake, or whether it started off as a mistake and then they made another one, or did somebody do something on purpose?

This claim was attacked from within by none less than the American national intelligence services, as the May 2020 article continues to document:

What did the intelligence service say?

In a rare public statement, the Office of the Director of National Intelligence, which oversees US spy agencies, said on Thursday it concurs with the “wide scientific consensus” regarding Covid-19’s natural origins.

“The [intelligence community] will continue to rigorously examine emerging information and intelligence to determine whether the outbreak began through contact with infected animals or if it was the result of an accident at a laboratory in Wuhan.”

[This] was the first clear response from American intelligence debunking conspiracy theories – both from the US and China – that the virus is a bioweapon.

But the story of the virus having a man-made (even an American-made) origin have not been silenced, and a few weeks ago, this story resurfaced with great force. Now it is becoming one of the dominant stories, gaining more steam as even Dr Fauci is trying to pivot to save his derrière.

President Trump, meanwhile, is standing by his claims, as this piece from Forbes, dated May 24th, acknowledges:

Following months of increased attention about the origin of Covid-19 and added momentum behind the theory the virus came from a laboratory in Wuhan, China, former President Donald Trump—an early proponent of the theory—declared in an interview Monday he was now near certain the disease leaked from the lab.

Speaking to Fox Nation’s Dan Bongino, Trump said he had “very little doubt” that the virus came from a lab and joked with Bongino that the host no longer needed to use the word “potentially” when talking about the theory.

“I think you can take the word ‘potential’ out that it came from the lab,” Trump told Bongino.

Trump was responding to Bongino referencing an article from the Wall Street Journal, which on Sunday published details about a U.S. intelligence report that found several researchers from China’s Wuhan Institute of Virology were hospitalized with a strange, Covid-like illness in November 2019, weeks before the first confirmed coronavirus case.

Now, one of the new questions is “how is it possible that the reporting on this was so wrong for so long?”

In the video below, Mollie Hemingway gives her take on the politics of journalism as applied to SARS-CoV-2. [Of note: an earlier news piece we have discusses how Joe Biden canceled Trump’s ordered COVID investigation, but this piece, with the video date stamped May 27, says that Biden ordered an investigation to begin. As one can surmise, Joe Biden is caught in the cross-hairs of this issue in many ways. We stand by our speculation that his actions are based on fear his own corruption of being found out all the more.]

Tucker Carlson gives his amazing perspective also – we felt it necessary to include his comments below:

Biggest Wealth Transfer in History as Rich Benefit by Inflation While Poor Suffer!

Tons of news. Let’s talk about what’s going on in the world