When a previous piece, entitled “Surprise, surprise (no surprise) – Analyst says Russians did NOT hack DNC server” was published, we got a very interesting reaction. One of the readers, speaking through a social network had this comment (edited): “Maybe, but they did meet with Trump’s people and he loves Putin.This from the Lincoln Project…” with an attached link that we include here for reference. That link goes to an allusion and a strong one, associating the felony convictions on several former Trump aides (which came out of the Mueller “witchhunt” investigation) to prove the point that because all these people around Donald Trump are felons, he is the most corrupt president ever. The advertisment is from the Lincoln Project, which is supporting Joe Biden for President. This advertisement opens a window into a truth few Americans seem willing to fully grasp – that our own nation’s media is deeply infused with propaganda, and worse, that a great many of our people, actually believe it. It would be fair to claim that American propaganda is far more successful than that of Russia or anywhere else that the US likes to proclaim “repressive.” It is further fair to say that we need to examine this – both the why and the how of this massively successful operation.

Why do nations employ propaganda?

As an in-general question, if we are honest, we get one answer: Propaganda exists as a tool for a given entity (a person, a company, a state, a religion, or a nation) to justify its own existence.

It is very important to understand that in of itself, the need to justify one’s existence is not inherently bad. Rather, it is quite natural. However, propaganda usually succeds in “sensationalizing” that justification in some way that tells us “my group is better than your group, or any other group.” When it tries to do this, propaganda uses devices that may employ truth, but only selectively, in such a way as to dramatically emphasize one’s own “right” against the other’s “wrong”.

How the US employed propaganda in the past and now 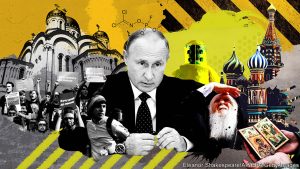 This is the place where media bias meets many of us. In Russia’s case, most Americans who are older than thirty remember when Russia was the Soviet Union, and the running narrative about that power was that they were out to subvert the whole world to Communism. Communism itself was portrayed as infinitely evil, a dystopian existence at best, where the masses lived in mutual misery and fear of being reported and taken away in the night. Certainly in the history of the Soviet Union all these things were true, but not always all at the same time. Nevertheless the period of anti-Soviet, anti-Communist propaganda was one of the principal narratives in the United States from at least as early as 1946, and running all the way to at least 1984. It is no accident than when Russia began to put herself back together and assert her own sovereignty as a nation, under President Putin, that powers in the United States who had been very pleased with a weak and compliant Russia, began to develop the present narrative, which is that essentially in Russia, nothing has changed; Putin misses the Soviet Union and therefore he wants the country to be communist again, and that he is a thug and he is wily and out to get us all.

The success of the Russiagate narrative

The Russiagate narrative is an excellent example of how deep this goes. Whether one thought Donald Trump “colluded” with Russians or not (“collusion” itself a shadowy term that sounds a lot more sinister than it actually is, because the nature of collusion was deliberately left vague – an Insert Conspiracy Theory Here sort of thing), the persisting notion that the Russians / Putin did *something* to “interfere” with the US presidential elections was never just completely blown out of the water by any mainstream figure, including the President himself.

However, the examination of this topic by William Binney, formerly of the NSA, reveals that no interference of any kind ever happened. This is my own assertion as well. However, Russiagate is useful for more things than just getting rid of President Trump. It can be used to cripple his efforts to restore and build a new and much stronger relationship with Russia, which is vitally needed. It also is used most effectively to keep Americans scared.

Scared of what, exactly? Nothing specific, just the vague notion that in some way “Putin is going to get us all.” No one even bothers to ask “for what purpose would he need us?”, because that is not a necessity of the current propaganda offensive. All that most people have to be told is “he is going to get you” and the defensiveness immediately arises.

The ability to so easily induce a false perception of “the other guy” is made successful because such propaganda was literally everywhere. There is something in the human psychology that responds very strongly to such stories, and I am sure that there are far deeper studies on how and why this works, but this link offers a beginning into further study of this for anyone who is interested.

There is one further aspect to the success of this particular propaganda campaign. The American nation has long upheld its own First Amendment guarantee of freedom of the press and freedom to peaceably gather and redress the government for grievances. We think we have a free press, and because that press is free of government control, we are inclined to believe the press is itself objective and instrinsically honest. For decades we trusted CBS, NBC and ABC reporters to bring us the truth about matters of importance around the world and at home. And because we ourselves were a victorious free nation, we thought that the incidence of the news lying to us was very low and worthy of great scandal if and when it happened. This has persisted into current times with great power.

In short, we generally are inclined to trust our news media outlets.

By contrast, many modern-day Russian people do not trust their news media. They have several reasons they tell me directly for this:

For this reason, many of my friends, colleagues and students in Moscow and across Russia often ask me questions, for they know that I practice journalism and they want to know “an American’s perspective” on American issues. This is good. This is what I also ask them – for the Russian perspective on Russian issues. This is vitally important for us to understand how we each see things.

But why is there a Russiagate narrative in the first place? What is the reality behind this?

Some of my own readers are virulently critical of my simple answer. Yet, there has been nothing to show me that the answer is wrong. In short, the reason the American Russiagate narrative and its cousins exists is because the powers that be in the West are afraid of the Russian Orthodox Church.

It is that simple.

Christianity in the West has largely been rendered toothless through its tendency to give way to secular humanist policies that on the surface may appear Christian, but are really intrusions of “The Brotherhood of Man” which seeks to usurp the Christian Church and replace it with itself, as a social model in which humanity sets its own course, independent of tradition, religion or any lessons that history has taught us.

Russia is not moving in the same direction as the West is. Russia and the former Soviet countries are increasingly Christian, and in such a manner that the Orthodox Church in these countries has a real say in policy and government.

If you are an American reading this, and the thought of “theocracy!!” arose in your mind, this is an example of American secular humanist propaganda and its success in molding your own thinking to jump to a conclusion. The implication is that theocracies are inherently bad. No explanation other than the vague notion that somehow a theocracy is going to try to force people to be Christian.

Yet we have theocracies in the world that no one complains about: Saudi Arabia is a major one. The fact that they are a very conservative Islamic nation with severe womens’ rights issues has been brushed aside by the country’s usefulness to the United States. Russia is not a theocracy, but even if it were, it would be a Christian theocracy, and those historically have been very free nations and even empires, not repressive like Muslim nations at all. Yet Russia’s symphonia of Church and State is taken as something totally sinister, and we are all supposed to just believe that it is.

This video will tell more about the reality of life in Russia. I can personally vouch for it, as I have been living in Moscow since 2015 and have seen much of the country. The direction is undeniably towards Christianity and as that has developed, so have things like freedom of speech (very highly valued here), and a sense of personal responsibility in life.

Any American should honestly ask themselves why they believe what they believe, and compare it to what information is given here. It should be very interesting thought.