Ukrainian President Volodymyr Zelensky told Italian state television network RAI on Thursday that he is prepared to meet with Russian counterpart Vladimir Putin. The Russian response to Zelensky’s remarks was not entirely hostile.

Zelensky said Ukraine and Russia “must find an agreement,” without ultimatums, to end the Russian invasion.

“We have to think of the future of Russia. I, as president of Ukraine, say these are our neighbors. There will be other presidents, other presidents and other generations,” he said, hoping for a better future.

Zelensky specifically rejected the notion of giving Russia territory in the rebellious Donbas region, or recognizing Russia’s occupation of Crimea, as sweeteners for a peace deal with Russia.

“We want the Russian army to leave our land, we aren’t on Russian soil. We won’t save Putin’s face by paying with our territory. That would be unjust,” he said.

“Crimea has always had its autonomy, it has its parliament, but on the inside of Ukraine,” he said of the peninsula annexed by Moscow in 2014.

“I have never talked about recognizing the independence of Crimea, we will never recognize it as part of Russia,” he insisted, adding that Kyiv will likewise “never recognize autonomy” for the separatists in Donbas.

Zelensky proposed a prisoner exchange that could give Ukraine a chance to rescue its forces trapped in the devastated city of Mariupol.

“We are ready to make an exchange with the Russians to save the living and take our dead out of Azovstal. The civilians have already been evacuated, now the wounded remain, we do not want to leave them there,” he said, referring to the steel plant in Mariupol where Ukrainian defenders are dug in.

Kremlin spokesman Dmitry Peskov said on Friday that Russia is not against a meeting between Zelensky and Putin.

“The position has not changed in any way. You know very well the position of the Russian president: nobody rejects the idea of such a meeting offhand, but it must be prepared well,” Peskov told a press conference. 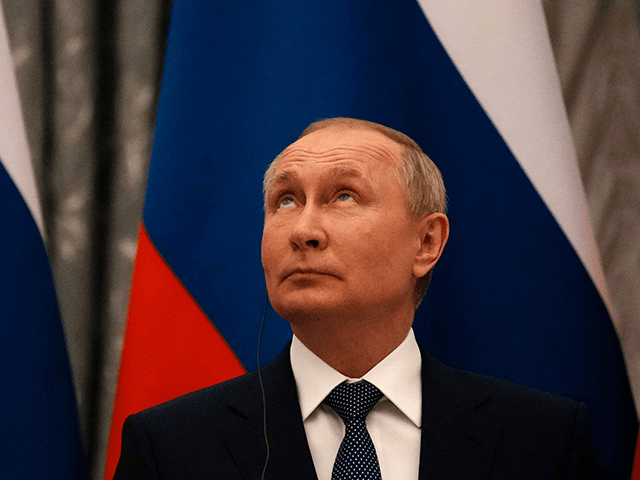 Russian President Vladimir Putin looks on during a press conference after meeting with French President in Moscow, on February 7, 2022. (THIBAULT CAMUS/POOL/AFP via Getty Images)

“Preparations for such a meeting can and must proceed in the form of drafting a corresponding document that would be eventually finalized at the summit level,” he said, hinting that Zelensky would have to put some concessions on the table.

“As we have already said, there is no progress for now. Our conditions are well-known. They were clearly formulated on paper and handed over to the Ukrainian side. No answer,” Peksov asserted.

The Russian terms Peksov mentioned include several items Zelensky ruled out as non-starters, including “independence” for the separatist regions coveted by Moscow and Ukrainian recognition of Crimea as Russian territory. The Russians also insist Ukraine must rewrite its constitution to permanently forbid joining NATO or similar international bodies.

Russia suffered another surprising defeat in Ukraine on Friday, incurring heavy losses as the Ukrainians destroyed a pontoon bridge the Russians were using to cross the Siversky Donets River west of Severodonetsk. 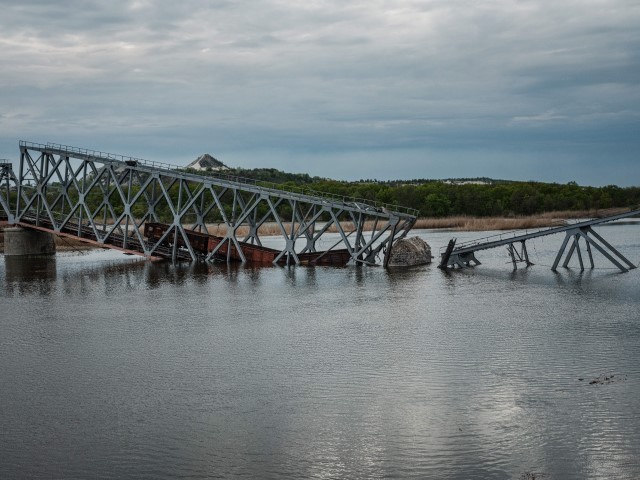 This photograph taken on April 29, 2022, shows a destroyed railway bridge over the Siverskyi Donets river in Raygorodok, eastern Ukraine, amid the Russian invasion of Ukraine. (YASUYOSHI CHIBA/AFP via Getty Images)

According to the British Defense Ministry, the Russians lost at least a full battalion tactical group in the battle over the bridge. The Ukrainian Defense Ministry supplied photos of the wrecked bridge that included the destroyed husks of Russian armored vehicles piled along the riverbank.

“Conducting river crossings in a contested environment is a highly risky maneuver and speaks to the pressure the Russian commanders are under to make progress in their operations in eastern Ukraine,” the British Defense Ministry noted.

“Russian forces have failed to make any significant advances despite concentrating forces in this area after withdrawing and redeploying units from the Kyiv and Chernihiv Oblasts,” the ministry said.

Zelensky said in his nightly address on Thursday that Russia has suffered an “obvious” strategic defeat in Ukraine, but “simply lacks courage to admit it.”